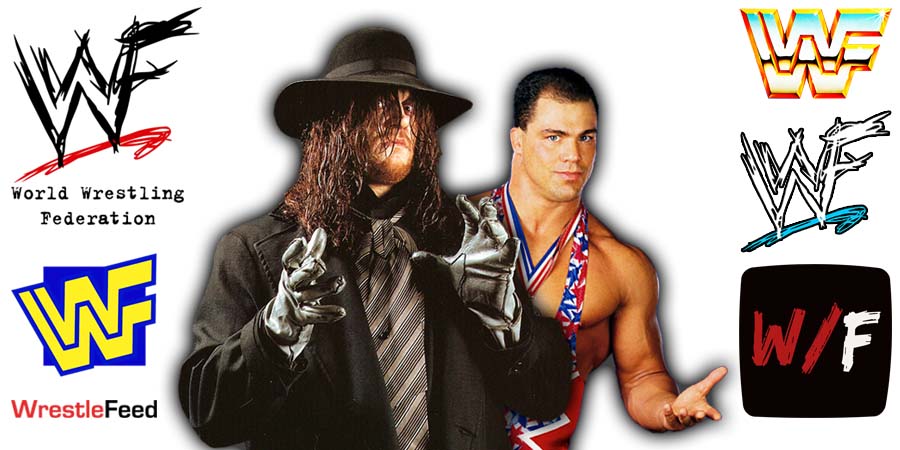 At the Vengeance 2002 pay-per-view, The Undertaker defended the WWE Undisputed Championship against The Rock and Kurt Angle in a Triple Threat Match.

This match was originally announced to be Undertaker vs. Rock for the Title, but Undertaker was booked to defend the Title against Angle on TV and that match ended up being a draw (Taker pinned Kurt and Kurt made Taker tap out at the same time), so Kurt was added to this PPV match.

At Vengeance, Rock pinned Angle to win the WWE Championship.

On a recent episode of his podcast, Angle was asked if there were plans for him to win the WWE Title on that night.

Angle said no and went on to note that he was added to this match so that Undertaker could lose the Title without getting pinned.

“Not at that particular time. I think they wanted to bring The Rock back and make him champion.

And I do believe that I was in that match particularly to do the job. All right, I think they wanted to protect Undertaker.

It was early in my career. And it was a great feature match to be a part of. And I think what they wanted to do beforehand was the week before I put Taker in the Ankle Lock briefly and then let it go to show that I was dangerous.”

It was broadcasted from the Denver Coliseum in Denver, Colorado and featured matches, interviews & storyline segments on the road to the ‘WCW Road Wild 1998’ PPV.

– Diamond Dallas Page vs. The Barbarian