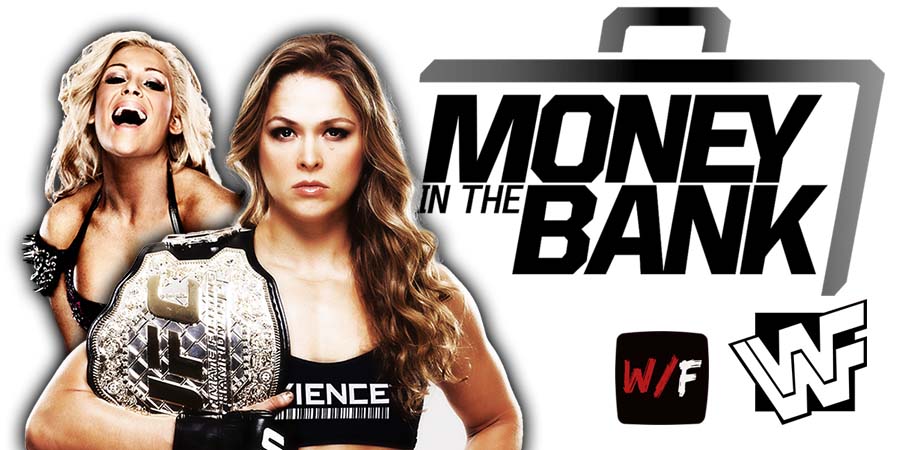 At tonight’s Money In The Bank 2022 premium live event, Ronda Rousey will defend the SmackDown Women’s Championship against Natalya.

During this feud, Rousey & Nattie have taken personal shots at each other.

Rousey went on to take a shot at Natalya & her sister by tweeting the following:

“Someone needs to tell you your discount OnlyFans sister fetish YouTube channel is weird and embarrassing, @NatbyNature”

Natalya then went on to take a shot at Rousey’s YouTube channel:

“It was either do a channel with my hot sister, or bring people to a rock at the back of my farm to cry and talk about conspiracy theories.

I chose the sexy sister thing. Cause we might be weird, but we’re not as weird as your hot takes on life.”

“Uh huh. We both know your face is too paralyzed by Botox to cry at this point.”

Natalya then took a shot at Ronda’s UFC losses by replying:

Then on an episode of SmackDown, Natalya came out dressed as Ronda. Rousey then came out and said she almost didn’t recognized Nattie without her rack out.

This led to Natalya posting the following video on Twitter, where she took a shot at Ronda’s revealing photoshoots:

This could be the dance hit of the summer! I call it, Ronda The Hypocrite. #SmackDown pic.twitter.com/qlgHJJNdK0

It was taped at the Hartford Civic Center in Hartford, Connecticut and featured matches, interviews & storyline segments on the road to the ‘WWF Fully Loaded 2000’ PPV.

1. Too Cool vs. Taka Michinoku & Funaki