Olympic Gold Medalist Gable Steveson was drafted to RAW last year, but hasn’t made his official debut as a WWE Superstar yet.

Steveson successfully defended his NCAA Championship on Saturday and then retired from amateur wrestling.

You can watch his retirement below:

No words can describe this moment.

After this, Corey Graves invited him to RAW. Below is what he tweeted:

Now, let’s get that next chapter started.

Gable then possibly gave a WrestleMania 38 spoiler by tweeting the following (and later deleting it):

“Also, I will be at WrestleMania.. 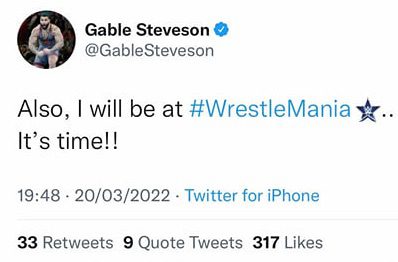 – Johnny B. Badd vs. Fred Avery