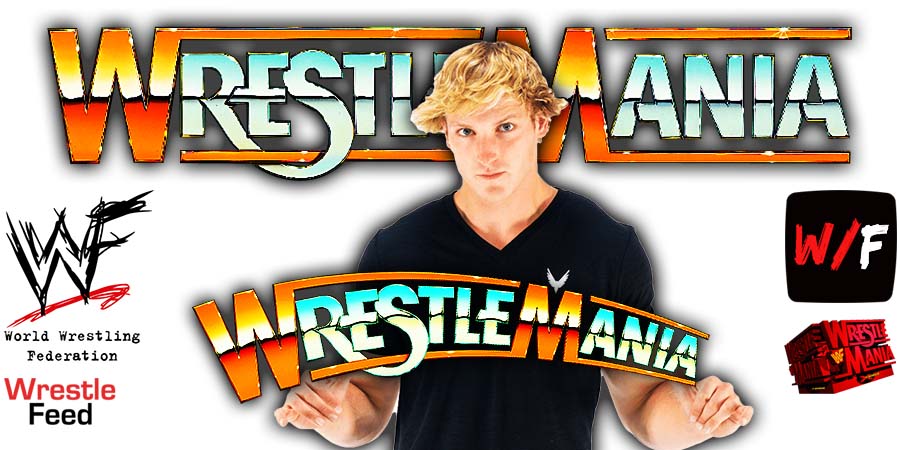 • REVEALED: Logan Paul Has Already Told Triple H Who He Wants To Face At WrestleMania 39

After drawing over 50 million views on Social Media with clips from his match against Roman Reigns, the Social Media Superstar has his sights set on another top WWE star.

On the latest episode of his podcast, Logan talked about how the formula of him going up against industry leaders works very good.

When he faced Floyd Mayweather, the PPV drew $65-70 million in revenue. When he faced Roman Reigns for the Undisputed WWE Universal Championship, Crown Jewel 2022 became the most watched International premium live event in WWE history.

The reason is, when I’m paired with a legend, a top-tier industry leader, the model works.

After Crown Jewel, John Cena posted me on his Instagram and then I saw an article saying he’s looking for an opponent at WrestleMania. I favorited it, responded with the eyes.

That’s a dream match. WrestleMania, in LA, on my birthday. Triple H, throw me a bone, give me a birthday present, let me take out John Cena. That’d be crazy.

That’s the model I’m going to pitch to WWE. This week, we’re meeting with them, I’m going to be like, ‘Hey, this works for me. Put me up against the best y’all have. I’m gonna f**king deliver. You know that for a fact. Not only put on an amazing match, but I’m going to put a$$es in seats and eyeballs on the television.’

Since I’m an outsider, they have to treat my career in the WWE a little differently than they have with the rest of the roster. The only caveat to this, is I could see how other wrestlers and fans would throw their arms in the air, ‘why is he getting a shot at Cena or Randy Orton?’ The answer is, I’m going to make f**king money.”

Logan Paul main evented his first ever WWE pay-per-view at Crown Jewel 2022 on November 5th at the Mrsool Park stadium in Riyadh, Saudi Arabia, where he challenged Undisputed WWE Universal Champion Roman Reigns for the Title and lost.

On this day in Pro Wrestling history on November 16, 1986, the World Wrestling Federation held a televised house show in the Maple Leaf Gardens in Toronto, Ontario, Canada.