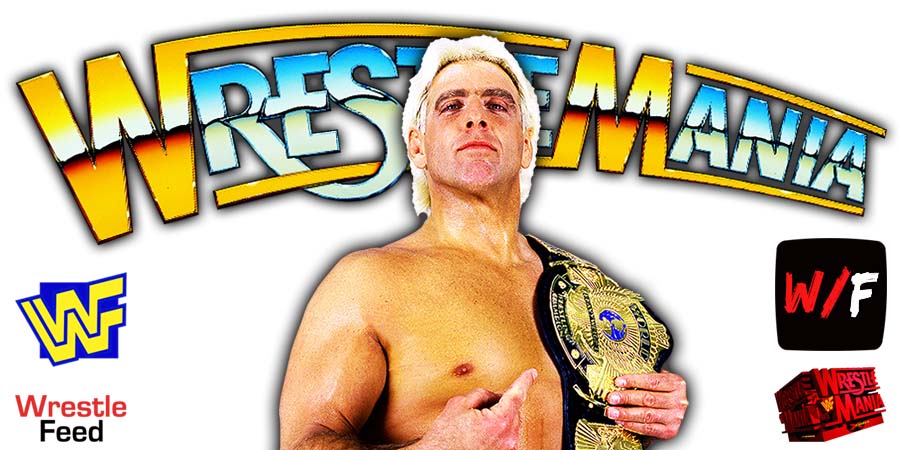 On the debut episode of his ‘WOOOOO Nation!’ podcast, NWA/WWF/WCW Legend Ric Flair finally addressed the reasons why the obvious WrestleMania VIII Main Event against Hulk Hogan did not happen.

They wrestled each other on several house shows in late 1991 and early 1992, but their scheduled main event for WrestleMania was canceled and it ended up being ‘The Macho Man’ Randy Savage challenging for Flair’s WWF World Title, while Hogan wrestled Sid Justice in the actual main event.

The official reason for their big match not happening was that Hogan was leaving for Hollywood to film ‘Mr. Nanny’, so he obviously couldn’t win the Title from Ric at WrestleMania.

“Our first show in the Garden, we did not sell out, so I don’t know whether people thought I couldn’t draw, because it’s funny, my whole career had been Southern-based until I got the belt and then I’m traveling across the country.

I still was never mainstream TV on the east coast, so being the NWA Champion, I was never in New York, I never was in Philadelphia until this small building came along and then we were there every night and went against those guys (WWF) when they were in the Spectrum.

We got together afterward, which was a good time — but I don’t think, maybe they didn’t perceive me as being over enough. Everybody’s speculation [says] it would have been the biggest thing ever, but you never know. I’ve heard Hulk wanted to go off and do TV, he did that Thunder In Paradise show, who knows? I’ve never questioned it.

To this day, [people ask] ‘Aren’t you mad about that?’ I said mad about what? I spent a year-and-a-half [there], I wrestled Bret Hart, I wrestled Hogan, I wrestled Jake [Roberts], I won the Royal Rumble, I wrestled [Randy] Savage, I won the World Championship twice, and then I go back [to WCW]. How could I be mad? I traveled with [Ted] DiBiase, [Roddy] Piper, the Nasty Boys, the Road Warriors, I mean look at the crew we traveled with.”

Also Read: Hulk Hogan Is Down To His 9th Grade Weight (Photo)

This episode was broadcasted from the 1st Mariner Arena in Baltimore, Maryland and featured matches & storyline segments on the road to the ‘WWE Survivor Series 2006’ PPV.