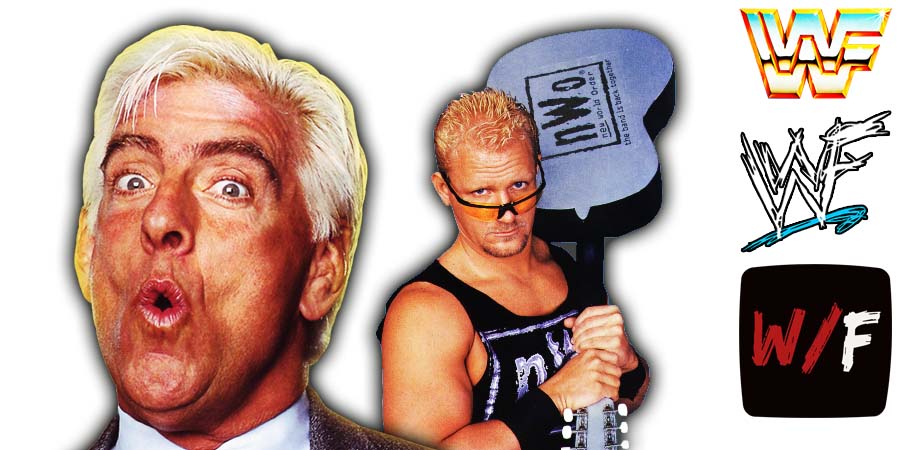 • Ric Flair Says Jeff Jarrett Is Too Old To Wrestle Him

The legendary Ric Flair will have his last match this Sunday night.

He will team up with his son-in-law Andrade El Idolo to face the team of Jeff Jarrett & Jay Lethal.

Jarrett is also going to be a part of WWE SummerSlam 2022 this Saturday night, where he will be the Special Guest Referee for the Undisputed WWE Tag Team Championship match between The Usos & The Street Profits.

To hype up his appearance at SummerSlam, Jarrett appeared on Friday’s SmackDown and Monday’s RAW.

Flair saw Jarrett’s WWE TV appearance and tweeted the following about the 55-year-old Hall Of Famer:

“Jeff Jarrett, I’m Watching You On SmackDown. Not Enough Plastic Surgery To Cover Up. Are You 92 Or 102???? You Are Way Too Old To Wrestle The Nature Boy!”

The Nature Boy recently revealed that he is injured heading into the match.

The 73-year-old Wrestling Legend is dealing with plantar fasciitis, which is:

“It is one of the most common causes of heel pain. It involves inflammation of a thick band of tissue that runs across the bottom of each foot and connects the heel bone to the toes. Pain might be worse in the morning and with prolonged standing, running or jumping.”

Flair said the following about his injury on Busted Open Radio:

“I have plantar fasciitis in the bottom of my foot. Other than that, I am perfect.

That damn thing is sore as sh*t. I’m at the doctor right now. They are gonna start injecting me with stuff.

I would just deaden it if I have to. You know me. It affects me daily. It’s hard running the ropes with the center of your foot…the middle of your foot is so sensitive.

Also Check Out: Ric Flair Assaulted Ahead Of His Last Match (Video)

3. George Steele vs. The Gladiator

6. One Man Gang vs. Eric Cooper