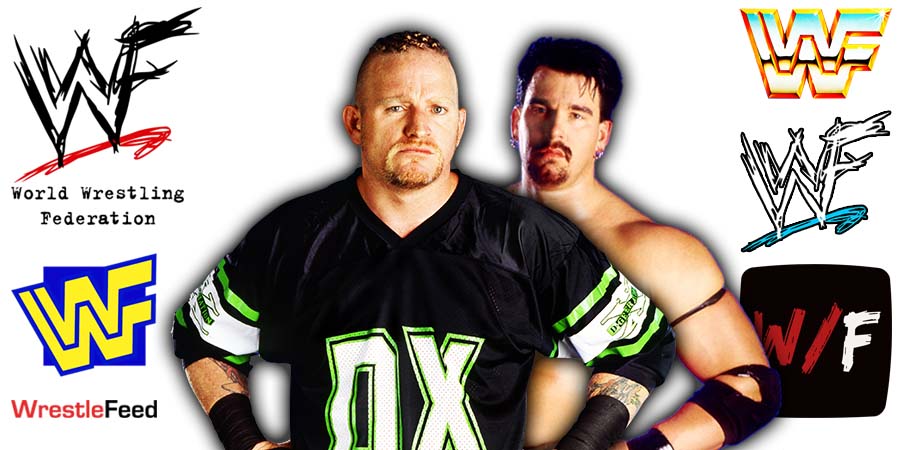 On an episode of RAW in 1998, The New Age Outlaws (Road Dogg & Billy Gunn) put Cactus Jack & Chainsaw Charlie (Terry Funk) in a Dumpster and pushed them off the ramp.

Wrestlers in the back thought The Outlaws went off script and things got physical backstage.

During an interview on SK Wrestling’s UnSKripted podcast, Road Dogg revealed that JBL knocked him out with a punch when he went backstage:

“You know what I remember about that the most is everybody coming out afterward and kind of surrounding us and acting, and I’m talking about the talent and stuff.

Acting like we did something really bad, and it got to the point where people started swinging on us, like over people’s heads and Bradshaw, like, reached over and knocked the crap out of me.

It got so chaotic that it was like a real event had happened, and I felt like, ‘Holy crap, did we really do something wrong?’ Look, they were safe, there were precautions taken, they were safe.

What I remember about that was everybody coming out about how real it felt after that, and it got to me like, ‘Holy crap, I must get out of here.’ But yeah, that was a fun part of my career for sure.”

Every time someone gets thrown off stage, I remember The New Age Outlaws/Cactus Jack & Terry Funk dumpster spot pic.twitter.com/6XuXkFKzub

It was broadcasted from the Nashville Municipal Auditorium in Nashville, Tennessee and featured matches & storyline segments on the road to the ‘WCW The Great American Bash 1997 PPV.

The Great Muta vs. Masahiro Chono