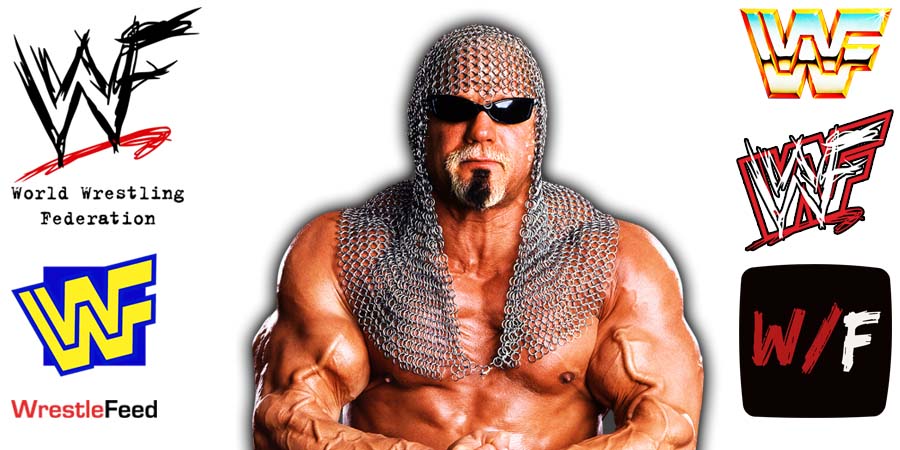 WWF Veteran Brian Blair (of The Killer Bees) mentioned that Hulk Hogan is going to be in this match, but Ric turned down that rumor as well.

During the Highspots Wrestling Network ‘Sign-It-Live’ stream, the host asked WWE Hall Of Famer Scott Steiner if he’d like to become his old friend’s final opponent.

Below is what Big Poppa Pump replied:

“He (Ric Flair) ain’t no old friend of mine. I would kill him [in the ring]. I’d destroy him. Yeah, everybody wants to see him get beat up.”

During an episode of the ARN podcast in 2020, WWE Hall of Famer Arn Anderson said the following about why Flair & Steiner have real life heat:

“Ric had a match with Scottie on a big show…Clash of Champions maybe. And it had some time involved and apparently Scottie did not like the match because he felt like Ric held back or tanked or something.

This is where the fun and speculation begins. Steiner has done interviews since, out right burying Ric for this match, claiming that Flair cut his legs out from under him. Ric has also commented on the match claiming he did no such thing, which leaves us to speculate.

From my vantage point as a guy who has wrestled both of these guys, and seen a ton of their work, I think it’s a little bit of both. I think the biggest problem was that they had very contradictory styles.

Scotty had been getting over with a more physical style of match that involved some Steiner specific moves, like the Tilt-a-whirl Slam, The Tiger Driver, The Frankensteiner, etc.

These moves were a big part of what fans liked about Scott Steiner, and Ric has the bumps he likes to take and is used to running a match his way. Whenever the match felt like it was starting to pick up for Scotty, Ric would cut him off. There were several instances where you could tell Steiner was trying to set up his trademark offense and Ric would block it or shut it down.

Ric also dominated a much larger portion of this match than I think any match I’ve seen him in before. This may have been subconscious, because he was feeling the pressure of the office wanting his run on top to come to an end and wanting to prove them wrong.”

In a 2008 interview with The Baltimore Sun, Steiner said the following about Flair:

“I always knew he was a piece of garbage. Flair never drew when I was in the NWA and WCW. Flair had all of his friends booking him on top and we were not drawing. I can say for a fact that Flair, at that time, did not draw a dime. And they say he was the greatest?

If you want an honest opinion, you ask somebody who they would rather be on the card with, Hulk Hogan or Ric Flair? If they don’t say, Hulk Hogan, they’re out of their minds.”

It was broadcasted from the Roberts Stadium in Evansville, Indiana and featured matches, interviews & storyline segments on the road to the ‘WCW The Great American Bash 1998’ PPV.