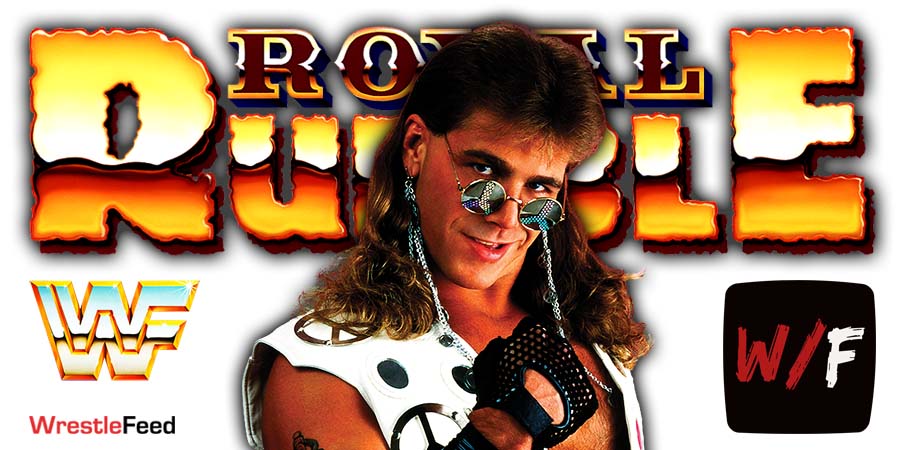 WWE Hall Of Famer Shawn Michaels appeared on RAW Talk last night. He was asked who he wants to see win the Men’s Royal Rumble 2022 match.

Below is what the 2-time Royal Rumble winner said:

“I’m kinda biased towards guys I’ve run into here in NXT. The likes of Damian Priest and Riddle, I’m definitely pulling for some of those guys!

I’d love to see a new breakout star, doesn’t matter who it is.

The Royal Rumble match always presents an opportunity for someone to step out. Anything can happen, and careers can be made.

This is absolutely the most wide open Rumble match ever. I actually enjoy that aspect. It’s harder to pick a winner.

I feel that adds to the excitement of this year’s match, it’s very hard to call the winner.”

“The only thing scarier than an angry Brock is a Brock so comfortable in his own skin, that he’s out there having a good time! That means he’s clicking on all cylinders.

For Bobby, this match is huge, and he is obviously laser focused. He’s a very intense guy.

This is probably Brock’s toughest fight ever. I’m just going to enjoy this match as a fan!”

The Honky Tonk Man wrestled for the World Wrestling Federation from September 1986 until January 1991, then worked for Ted Turner’s World Championship Wrestling for the second half of 1994, before he returned to the WWF, this time as an occasional part-timer, from 1997 to 2001.

Honky is still the record holder as the longest reigning WWF Intercontinental Champion of all time, and let’s not forget he’s also the real-life cousin of fellow Old School Wrestling Legend Jerry “The King” Lawler.

In 2019, he was inducted into the WWE Hall of Fame by his former manager “The Mouth of the South” Jimmy Hart.