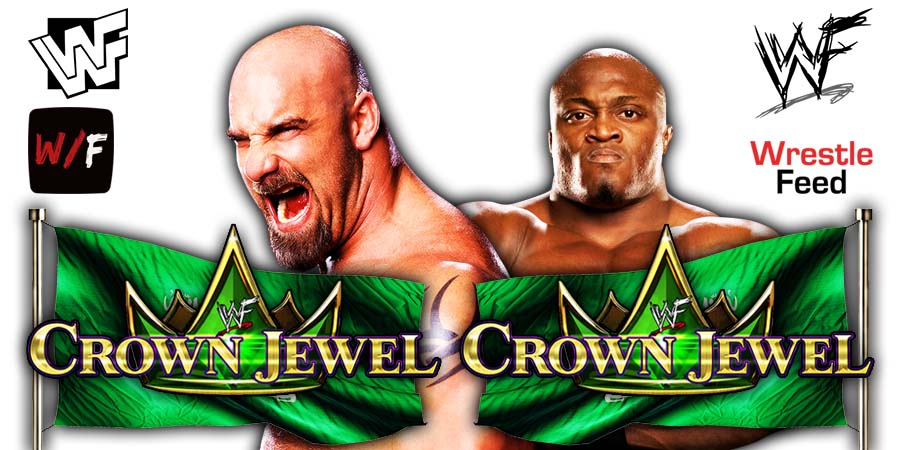 • Spoiler On The Outcome Of Bobby Lashley vs. Goldberg II

Bobby Lashley defeated WWE Hall Of Famer Goldberg in the co-main event of SummerSlam 2021 to retain the WWE Championship, as Goldberg suffered a leg injury after MVP’s attack and couldn’t continue.

Lashley kept attacking Goldberg after the match and this led to Goldberg’s son Gage jumping on Lashley, but Lashley put him in the Hurt Lock and took him out.

As we reported before, a rematch between Goldberg & Lashley is scheduled to take place at the WWE Crown Jewel 2021 pay-per-view in Saudi Arabia in October.

However, this rematch is not going to be for the WWE Championship.

WWE caught up with Goldberg and he made it clear that he’s coming for Lashley’s soul this time, and not the WWE Championship.

“I have ligament damage and I have a pending knee surgery (after the match with Bobby Lashley), does that answer your question? I really don’t care.

What I do care about is that dirty son of a b*tch Bobby Lashley and what he did to my son at SummerSlam. I just left the house, Gage’s shoulder is all jacked up, his neck hurts. God knows what a guy that size could have done to my son.

So, the objective has changed. I’m not coming for the WWE Championship…. I’m coming for Bobby Lashley’s soul and I will rip it straight from his chest.”

We are being told that Goldberg is going to pick up a win in this match, since it’s going to be a non-title bout. Goldberg is expected to win in such a way that it protects Lashley as well. Lashley will still remain the WWE Champion.

Goldberg has lost 3 back-to-back matches and he needs a win right now. Below are the results of his last 5 matches:

– Lost the Universal Championship to Braun Strowman at WrestleMania 36

– The Giant vs. Rick Fuller