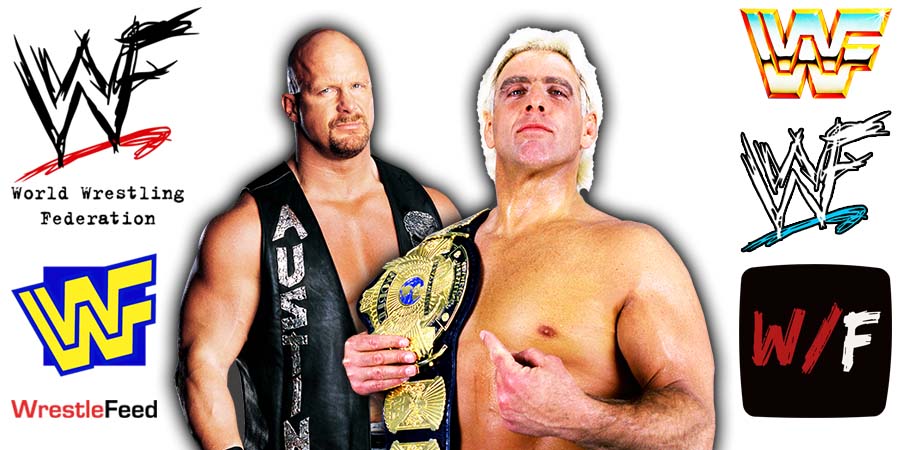 WCW/NWA/WWF Legend Ric Flair will wrestle the final match of his career on July 31st at the Nashville Municipal Auditorium in Nashville, Tennessee, teaming with his son-in-law Andrade El Idolo against the team of Jeff Jarrett & Jay Lethal.

WWF Legend Stone Cold Steve Austin was recently interviewed by Old School Wrestling journalist Bill Apter about this event and made it clear that he thinks the match will be great.

“Well, it’s gonna be his final match, so I guess he’s in the mood to have one more go and to prove he was the man.

I’ve said before, I think he was the greatest traveling World Champion that there ever was. There’s a reason he had the belt as many times as he did, because he was that damn good. He lived the lifestyle on the road to the nth degree, let’s say.

For him to have his final match, I wish him nothing but the best. I hold him in the highest regard and have the highest respect for him.

I’m behind everything he does in the ring. So, I look forward to seeing it. I wish I could be there in person. Again, I’m not traveling anywhere right now, but I wish him all the best and I know it’s gonna turn out great and I can’t wait to watch it.”

Later on she became the valet of the Filthy Animals and Shane Douglas, before she was fired in late 2000.

The World Wrestling Federation signed Wilson to a contract in 2001, where she would join the WCW/ECW Alliance during the infamous invasion storyline.