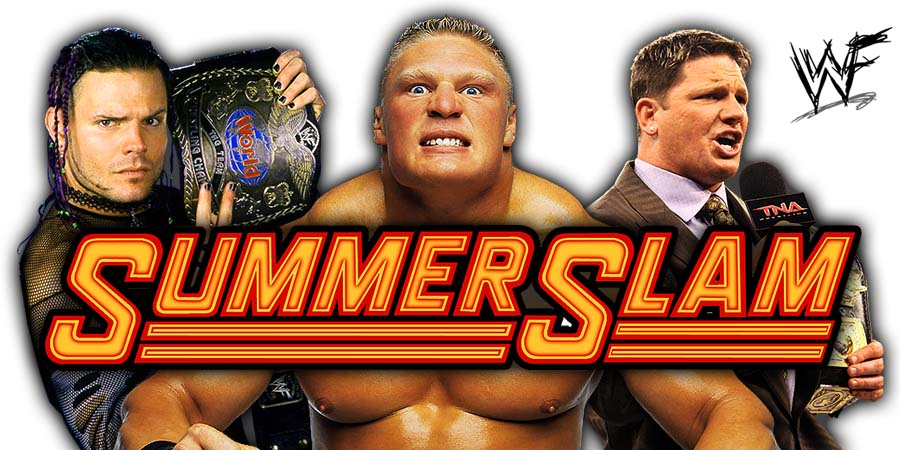 Up next is the Triple Threat match for the SmackDown Women’s Championship.

After good back and forth action, it looks like Becky Lynch is closing in on a victory as she’s beating the crap out of Carmella.

Carmella puts Becky down from the top rope and goes for the pin, but Becky kicks out.

Becky is looking to hit the Bexploder, but Carmella pulls her hair. This leads to Charlotte Flair spearing both women!

Charlotte goes for the cover on both of them one by one by fails to get the 3 count.

Charlotte locks in the Boston Crab and then turns it into the Figure 4, but Becky jumps on both of them from the top rope!

Becky goes for the cover on Charlotte, but Carmella breaks it up.

Carmella hits a Suicide Dive on Becky through the ropes! Charlotte then follows with a Corkscrew Moonsault on the outside!

The action return to the ring and Becky looks in the Disarmher on Charlotte, but Carmella breaks up the hold.

Carmella tries to pin Becky by taking advantage of the ropes, but Becky kicks out. Carmella nails a Superkick on Becky and goes for the cover, but Charlotte breaks it up.

Becky locks in the Disarmher on Carmella, but Carmella manages to reach the bottom rope.

Becky pulls her away and locks it in again, but Charlotte nails Becky with the Natural Selection to win the Title!

After the match, Charlotte & Becky hug, but Becky then attacks Charlotte and turns heel!

FRIENDS NO MORE. @BeckyLynchWWE has HAD IT with coming up short!#SummerSlam pic.twitter.com/hKizZbQj0l