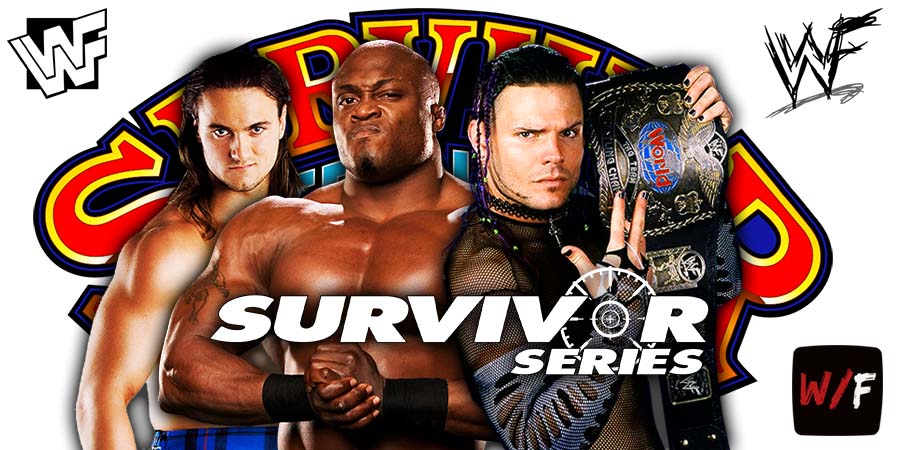 Both women go at it as soon as the match begins. This is the second most anticipated match of the night (behind the Universal Champion vs. WWE Champion main event), due to reports of real-life heat between both women.

After great back & forth action, Becky pinned Charlotte by holding the ropes.

Charlotte tried to do the same seconds before the finish, but the referee caught her.

Charlotte laughs at Becky for beating her by using her trick. Charlotte took her belt and left the ring, while Becky celebrated her victory.

Next match is the Men’s RAW vs. SmackDown 5-on-5 Traditional Survivor Series Elimination Match.

Below are the members of Team RAW:

Below are the members of Team SmackDown:

As soon as the match begins, Kevin Owens gets himself counted out.

Finn Balor hit his finisher on Corbin and eliminated him.

Lashley locked in the Hurt Lock on King Woods and Woods passed out.

Lashley and McIntyre renewed their rivalry during this match and brawled. They began brawling outside the ring and both got counted out.

Lashley attacked McIntyre even after their elimination, but McIntyre then took out Lashley with a Claymore Kick.

Rollins then mocked McIntyre for getting eliminated and waved goodbye to him, and Drew took him out with a Glasgow Kiss.

Sheamus hit Balor with a Brogue Kick and pinned him.

Theory rolled up Sheamus to pin him.

Sheamus then attacked Jeff Hardy, his own team member, on his way out.

Hardy hit a Swanton Bomb on Theory to pin him.

It’s Rollins vs. Hardy now. Hardy hit Rollins with the Twist Of Fate. He then went for the Swanton Bomb, but Rollins got his knees up.

Rollins hit Hardy with a Stomp to pick up the win.