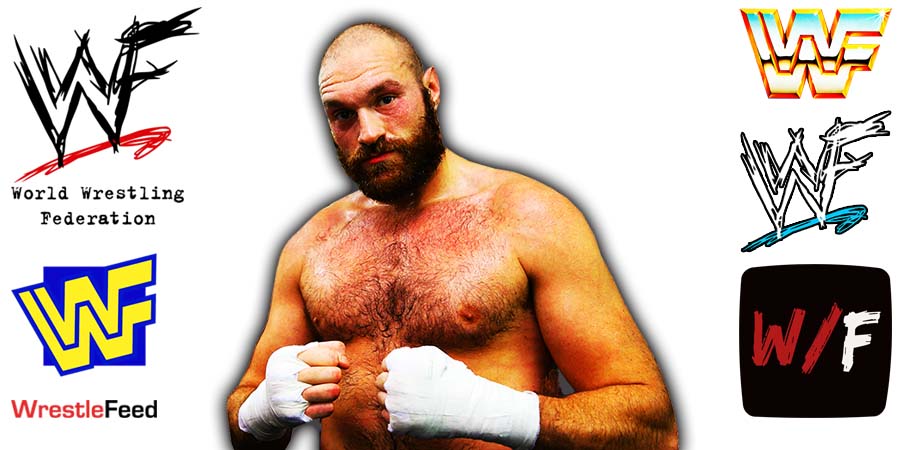 Undefeated Boxing Heavyweight Champion Tyson Fury was supposed to face Deontay Wilder in a Boxing match on July 24, 2021, but it got postponed due to Fury testing positive for COVID-19.

This fight will now happen tonight at the T-Mobile Arena in Paradise, Nevada and Old School WWF Legend The Undertaker seems to be rooting for Tyson Fury, as the Deadman took to Twitter and said the following in a video clip:

“You smash this guy and when you’re looking over him, just for me, look down at him and say, ‘Rest In Peace!’”

Tyson Fury then replied with a video, including a few words of his own:

“This one’s for The Undertaker. I’m here today in your hat, sir. I’m gonna smash him and I’m gonna say, ‘Rest In Peace’.”

I got you @undertaker ⚱️ pic.twitter.com/aEV3rxgiqh

Fury has competed in WWE as well. He defeated Braun Strowman via Count-Out at the WWE Crown Jewel 2019 PPV in Saudi Arabia on October 31, 2019.

Also Read: Will The Undertaker Return For A Match After Being Listed As A Free Agent After The 2021 WWE Draft?

Easily the most memorable storyline he was involved in during his time in the WWF (later renamed WWE) was in 2000 & 2001, when he called himself “Steven Richards” and became the leader of his own faction ‘Right to Censor’.