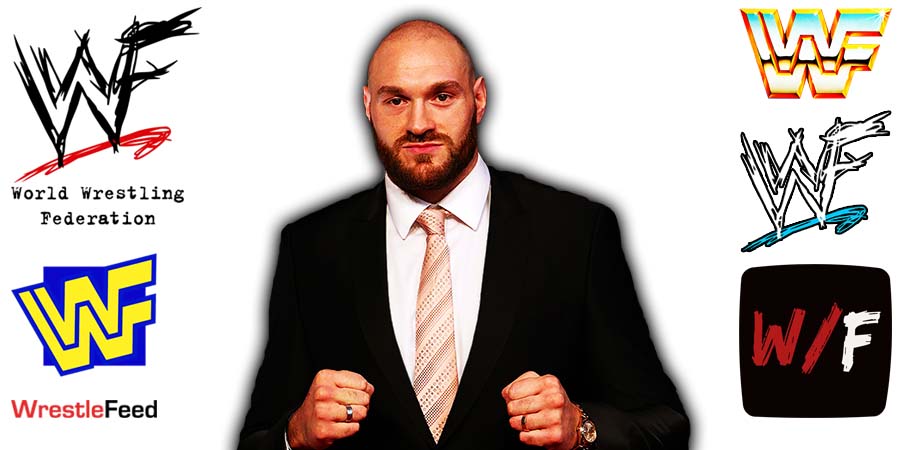 Tyson Fury defeated Dillian Whyte at the Wembley Stadium to retain the WBC and The Ring Heavyweight Titles.

He is still undefeated and his Boxing record is now 32-0-1.

In the post-fight press conference, Fury talked about returning to WWE in the coming months and finally having a match with former WWE Champion Drew McIntyre, which was originally planned for 2020, but didn’t happen due to the COVID-19 pandemic.

Below is what The Gypsy King said:

“Don’t rule me out fighting there. You might see me at SummerSlam. I have to speak to Vince and the boys to maybe make this happen.

I know that Drew McIntyre has been saying a lot of things about me. I’ll have to knock him out. I’d love to be at Cardiff, back at the center stage in the UK, especially for the wrestling.

I enjoyed it last time in Saudi Arabia. It was fantastic. To come here and do it would be phenomenal. We’re definitely going to make a bit of contact to see if we can make that SummerSlam thing a reality.”

"Don't rule me out of fighting there! You might see me at SummerSlam. I got to speak to Vince and the boys! I know @DMcIntyreWWE has been saying a lot of things about me! I'd love to be at Cardiff!" – @Tyson_Fury 👀

This episode was broadcasted from the Earls Court in London, England (Europe) and featured matches, interviews & storyline segments on the road to the ‘WWE Backlash 2007’ PPV.