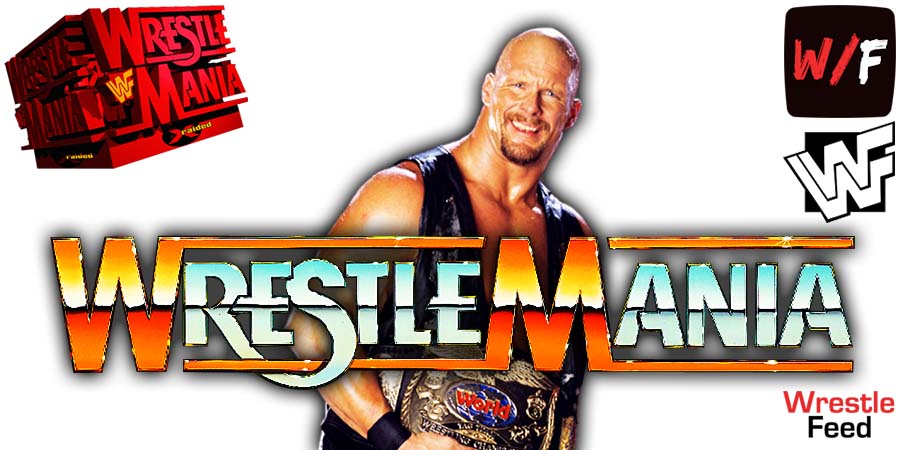 This talk show segment will turn into a fight, or even a match, as Austin mentioned.

A mutual friend of Austin and Dave Meltzer of the Wrestling Observer recently saw Stone Cold during a training session and he was amazed at how good Austin’s physique looked at the age of 57.

Austin is also working on his cardiovascular condition, because what he’s going to do at WrestleMania is going to be more than just a Stunner.

According to the Wrestling Observer, Austin is going to be shirtless at WrestleMania 38, looking in top shape while fighting Owens:

He’s training very hard so it’s gonna be more than [just a Stunner].

Will he do a 20 minute match? No, I don’t think so. Will he go 7 minutes or something and have a brawl all over the place? I kind of expect that, yeah.”

2. WrestleMania 15 – defeated The Rock to win the WWF Championship

3. WrestleMania 17 – defeated The Rock to win the WWF Championship

During an interview on the Rich Eisen Show, Austin said the following about why he’s returning:

This comeback means a lot to me as I’ve been getting back into in-ring shape. I’m gonna go out there and do the absolute best I can.

Today would have been the 50th birthday of “No Gimmicks Needed” Chris Candido (Real name: Christopher Candito).

Candido was in a lifelong relationship with his high school sweetheart Tammy Sytch and together they joined the World Wrestling Federation in 1995 as “The Body Donnas” with Chris becoming “Skip” and Tammy became “Sunny”, before both were joined by “Zip” (Dr. Tom Prichard with short hair).