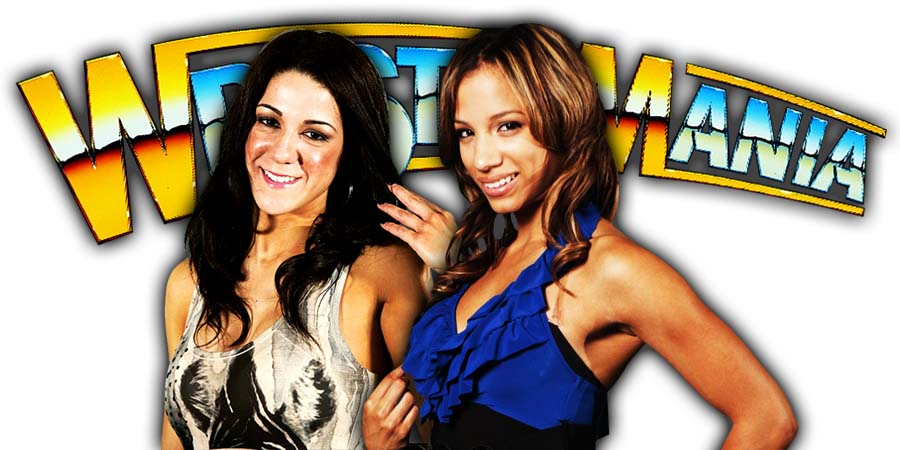 Wrestlers come out chasing WWE 24/7 Champion Mojo Rawley. WrestleMania 36 host Rob Gronkowski takes advantage of this and jumps on all of them from the perch.

Quite literally diving into the #247Title picture is none other than @RobGronkowski! #WrestleMania pic.twitter.com/zdCJdGnI4M

After fast back & forth action, Angelo Dawkins pins Theory after Montez Ford jumps on Theory while he was pinning Dawkins.

Garza attacks the champions after the match and Zelina joins in as well. This leads to NXT wrestler Bianca Belair (wife of Montez Ford) coming out to make the save.

Bianca lays out Zelina with the KOD and the babyfaces celebrate.

Up next is the Fatal 5 Way elimination match for the SmackDown Women’s Championship.

Tamina is the first woman eliminated after all women jump on her to pin her. Naomi is the next one eliminated.

Sasha & Bayley are now working together to eliminated Lacey, but Bayley nails Sasha with a knee to the head!

Sasha comes back into the match and confronts Bayley. Lacey hits Sasha with a Woman’s Right and eliminates Sasha!

Lacey hits the Moonsault on Bayley and goes for the cover, but Bayley kicks out.