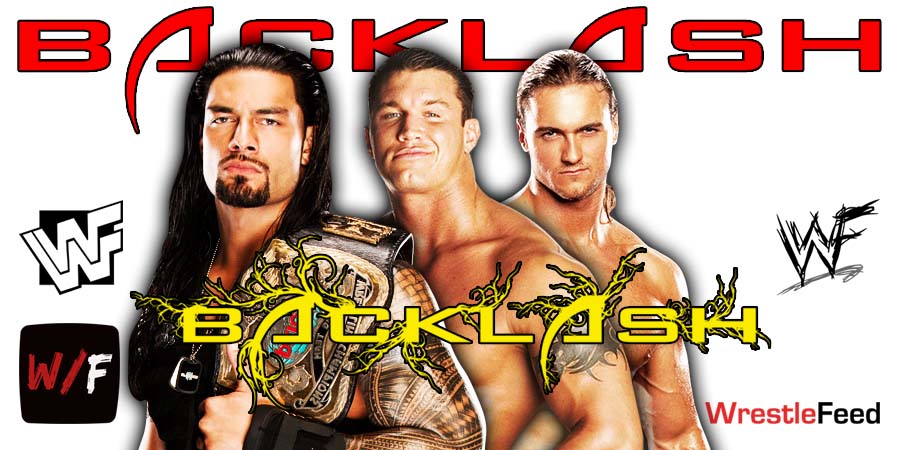 This is part 5 of our WrestleMania Backlash 2022 live coverage (part 4 is here).

Up next is Happy Corbin vs. Madcap Moss. After back and forth action, Moss pinned Corbin to pick up the win.

Kayla Braxton gives an update on Charlotte Flair and said The Queen suffered a forearm injury during her “I Quit” match.

Up next is the main event of the evening and it is a 6-man tag team match.

During Roman’s entrance, the commentators plugged the fact that he’s the most searched wrestler in the world today and that Charles Barkley acknowledged him recently.

Jimmy Uso begins the match for The Bloodline. Roman eventually tags in to go head to head with McIntyre! However, Roman played him and tagged out. Roman shouts he takes the shots around here.

Roman tags in again, this time to beat up Riddle. Roman hits the Urinage on Riddle and goes for the cover, but Riddle kicks out.

Jey Uso now tags in to work on Riddle and he superkicks Orton while he’s at it.

Roman tags in, but Riddle tags in Drew and Roman isn’t happy because he miscalculated his tag.

Both powerhouses start brawling and Drew is throwing Roman around. Jey distracts Drew and Roman hits him with a Superman Punch!

Reigns is now dominating McIntyre and lays him out with a Clothesline. Roman brings both his Titles in the ring and begins posing with them. Roman slaps Riddle off the ring apron.

Orton RKOs everyone, including Reigns! Orton goes for the cover on Jimmy, but Jey breaks it up.

Riddle and Jey are now going at it. Riddle hits Jey with everything he has, but still can’t put the Uso away.

Jey hits Riddle with a pop-up neckbreaker and goes for the cover, but Orton breaks it up.

Roman hits Randy with a Superman Punch on the outside and Drew sends Roman into the steel ring steps.

Riddle takes out Roman and Jimmy on the outside with a dive. Jey takes out Riddle with a Suicide Dive.

Riddle hits RKO on Jey from the top rope. Roman quickly tags in and hits a Spear on Riddle to pick up the win!