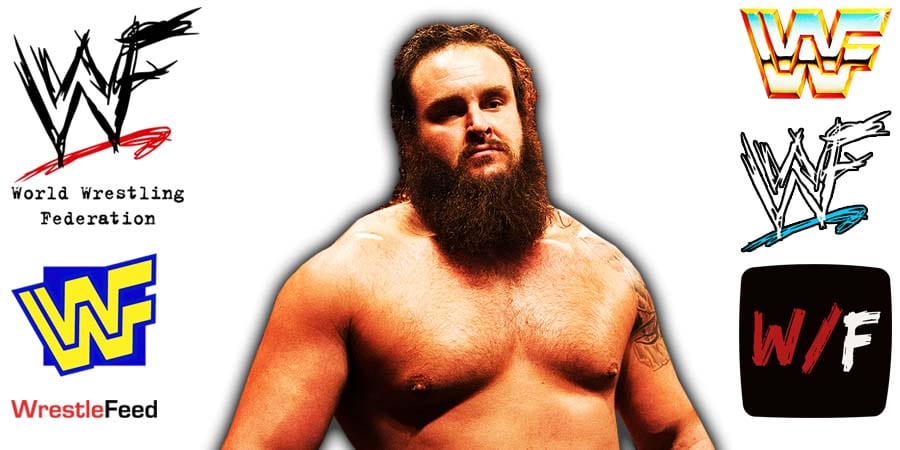 AEW wrestler Brodie Lee passed away at the age of 41 on Saturday night due to lung issues.

The pro wrestling world is heartbroken over The Exalted One’s shocking death, and everyone is paying tribute to him in different ways.

Instagram user otanod__ created an artwork of the other Wyatt Family members and Cody Rhodes saying goodbye to Lee.

Braun Strowman shared this picture in his tribute to Lee, but the WWE staff removed the watermark of the creator and Cody Rhodes from the picture before Strowman posted it on Instagram.

“The crazy thing about this fan art is I’m sure I can speak for the rest of the guys in it and in the locker rooms he shared that we all looked up to Jon.

From day one when I didn’t know sh*t about the business (trust me he reminded me on the regular lol) he took me under his wing his constructive criticism was like no ones else’s he had no problem telling me when I sucked but he also was one of the first ones to tell me when I did something good.

We traveled the world together and he had to put up with my crazy a$$. I learned so much from him and god the memories I will cherish the rest of my life are unbelievable. We all used to joke about when we were all old and fat and fired from anywhere that would let us wrestle that we were gonna take over the mid evil times business and he said he was gonna be the silver knight and the silver knight ain’t putting nobody’s a$$ over. Because in the ring he made everyone look amazing.

He was one of the must unselfish men I’ve ever met and an amazing husband and father it was always magical being around him with his family cause he went from salty old Brodie to loving Jon.

I wish I could walk out to the firefly’s one more time with you brother. Those were the most amazing days of my career and I will hold them high till I’m gone. Save me a seat and a turkey leg at the round table. Ride hard silver knight. I love you.”

The creator of the work then called out Strowman for it.

The former WCW Main Eventer became famous for having one of the greatest undefeated streaks in Professional Wrestling history in 1997-1998.

Bill also had roles in several movies such as “Universal Soldier 2 : The Return”, “Santa’s Slay”, “Ready to Rumble”, “The Longest Yard” and “Half Past Dead 2”.

On April 6, 2018, he was inducted into the WWE Hall of Fame by Paul Heyman, thus headlining the 2018 induction ceremony.

He’s currently working as a part-time wrestler / special attraction in WWE and is on a two match per year deal till 2022.