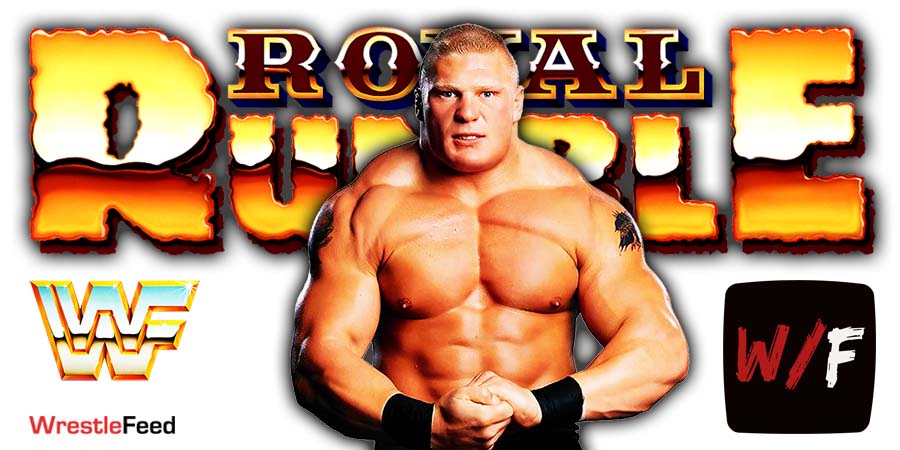 At last night’s Royal Rumble 2022 premium live event, Drew McIntyre returned during the Men’s Royal Rumble match and was the last man eliminated from the match.

Brock Lesnar, who entered at #30, F5ed McIntyre out of the ring to win the match.

Drew was dealing with neck issues, but he rehabbed very hard and returned in under a month.

McIntyre wanted to win this match, so he could have his moment in the main event of WrestleMania 38 in front of the fans, something he missed out on in 2020 at WrestleMania 36.

Below is what The Scottish Warrior said about his loss in a backstage interview after the Royal Rumble:

“I was supposed to be out a lot longer, a lot longer than a month. The doctor looked me right in the eye and said, ‘Drew, this could be surgery,’ the first time I was with him.

Fortunately, that’s not how it went down. I rehabbed my a$$ off and got back in one month, the Royal Rumble, a chance to win it and go to WrestleMania, and this time have a full screaming crowd of thousands of people and who is the man who took me out? The guy I didn’t know was in the Rumble in the first place.

The same man I beat for the WWE Championship in the main event of WrestleMania.

The thing is, how I dreamed of it as a kid was main event, winning the championship, thousands of screaming people. And somehow the only guy in history who’s done two out of three, and two out of three is bad in Drew McIntyre’s book.

I want the main event, I want the Title, and I want those people there to feel that moment with me. And Brock Lesnar took that away from me tonight.

There’s a lot of time to WrestleMania, I’ll wrap my head around that.

In the meantime, Corbin and Madcap, that was just the beginning. We are far from over.”

Madcap Moss and Happy Corbin brutally assaulted McIntyre backstage at the Day 1 PPV to write him off TV. Last night, McIntyre brutalized both of them with steel ring steps.

The Hood vs. Mr. Eito