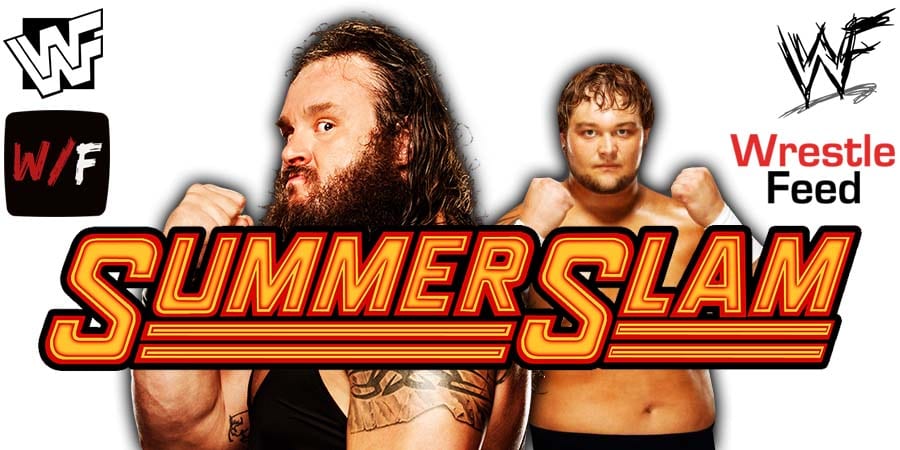 This is The Fiend’s first proper match since his loss to WWE Hall of Famer Goldberg earlier this year at WWE Super ShowDown in Saudi Arabia.

The Falls Count Anywhere match begins and Strowman goes right after Fiend. The Fiend fires back and immediately drops him with a slam. Fiend then tries to hurt Strowman’s neck.

The action goes to the outside and Strowman chokeslams Fiend on the edge of the announce table and Fiend looks hurt. Strowman then picks up the steel steps and hits them in Fiend’s head.

Strowman then hits a Running Powerslam on The Fiend in the ring and goes for the cover, but Fiend kicked out.

Fiend & Strowman are now fighting backstage at the Gorilla Position. Fiend hits Strowman with a Sister Abigail and goes for the cover, but Braun kicks out.

Fiend locks in the Mandible Claw on Strowman as they are fighting on the entrance ramp, but Strowman pushes Fiend away.

Strowman hits another Running Powerslam in the ring and goes for the cover, but Fiend kicks out again!

Strowman now begins cutting the ring with a box cutter to expose the ring. The wooden part of the ring is now visible.

Strowman’s plan backfires as Fiend drops Strowman on the wood and hits two Sister Abigails on the wood to pin Strowman!

Reigns absolutely destroys Strowman & Fiend, and poses with the Universal Championship to end the show!