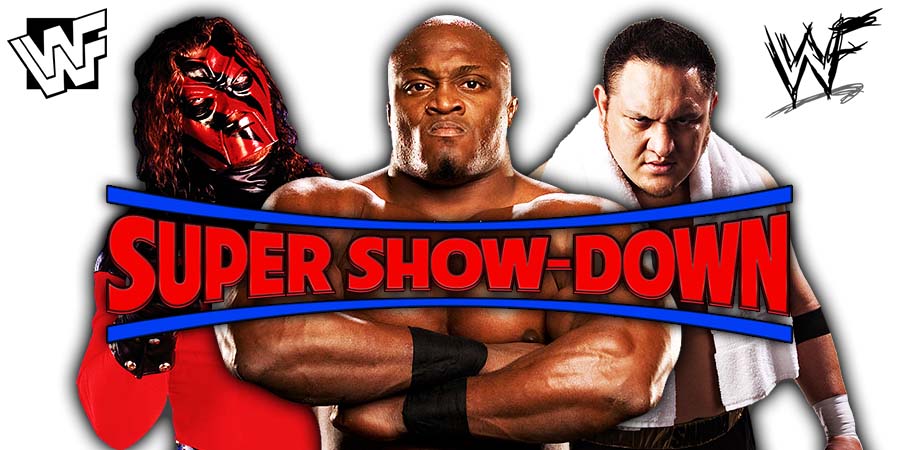 This is part 4 of our WWE Super Show-Down Live Coverage (part 3 is here).

Up next is a Women’s Division tag team match between The IIconics and Asuka/Naomi.

After back & forth action, The IIconics pick up the win after Peyton Royce pins Naomi after a Knee strike.

Billie Kay gets a little bit emotional after the match as both women hug each other to celebrate their victory.

Up next is a No DQ, No Count-Out match for the WWE Championship!

Joe doesn’t enter the ring and both men begin fighting on the outside! The referee hasn’t rung the bell yet.

Both men get into the ring after a little brawl and the referee officially begins the match.

Styles has held the WWE Championship for 332 days now.

Joe sends Styles over the announce table in a vicious way, but Styles immediately gets up and enters the ring to throw shots at Joe again.

Joe hits Styles with a couple of brutal chops and Styles is STUNNED! Joe kicks Styles out of the ring and hits him with a Suicide Dive!

This might be the LOUDEST sound that has ever echoed throughout the @MCG.#WWESSD #WWEChampionship @SamoaJoe pic.twitter.com/DjaammBgCK

Styles is getting back into the match as he nails some big moves on Joe.

Joe nails a Lariat and Styles is turned inside-out. Styles is bleeding from the mouth now and the referee takes out his white gloves.

Styles picks up a Steel Chair and it’s legal in this No DQ match. Styles dropkicks the Chair right into Joe’s face!!!

Styles now attacks Joe with a Steel Chair. Styles places the chair in the corner and jumps off of it onto Joe, but Joe catches him and hits him with a Urinage on the Steel Chair!

Joe now takes out a Table from underneath the ring and attacks AJ with a Steel Chair.

Joe is trying to put AJ through the Table, but Styles counters and both men go through the table!

Joe hurt his leg during this (kayfabe). The referee is checking on Joe, but AJ tells the referee to go back and Styles attacks Joe’s injured leg.

Styles tries to lock-in the Calf Crusher, but Joe counters and locks-in the Coquina Clutch!

Styles manages to break the hold by crawling out of the ring. Styles hits a Springboard 450 Splash on Joe’s injured leg!

Styles nails a Phenomenal Forearm on the outside off the barricade. Styles is now dragging Joe into the ring so he can pin him.

The BATTLE rages on…

Styles goes for another Phenomenal Forearm, but Joe counters and locks-in the Coquina Clutch and slams Styles on his head! Joe goes for the cover, but AJ kicks out.

Joe goes for the MuscleBuster, but his leg gives out and Styles gets away. Styles locks in the Calf Crusher on Joe and Joe taps out!