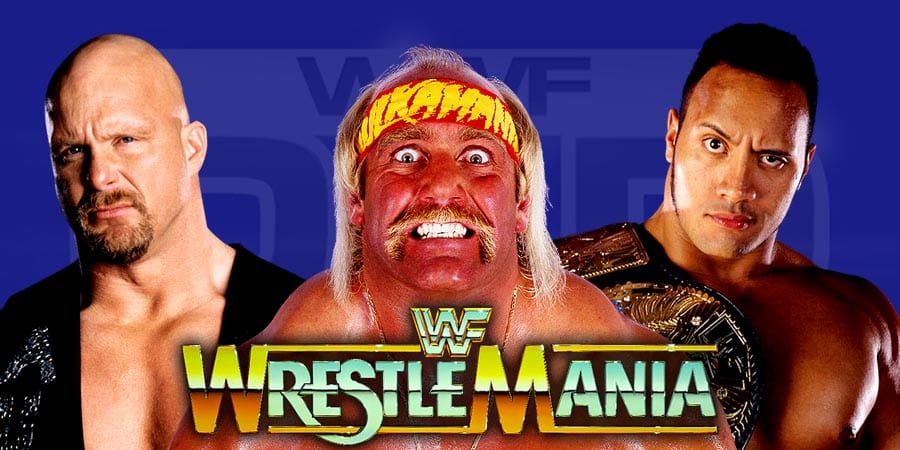 Let’s clear something up right away, when we say “Main Event”, we’re reffering to the last match on the WrestleMania card, for the simple reason that it’s an annual tradition since the very first WrestleMania in 1985, that the last match to close the show is THE Main Event of the show that night.

A great example would be Shawn Michaels vs The Undertaker from WrestleMania 25, which would rank very high here, but it ended up not even making the list, because it wasn’t the official Main Event that night, Triple H vs Randy Orton was.

Also, please keep in mind that we’re not ranking the matches by doing the weird IWC Smark mistake of counting moves or high spots, but rather ranking them instead by how big and great they were in the form of historical importance, making an impact, being entertaining and including great storytelling.

On March 29, 1998 at the WrestleMania XIV PPV, WWF Champion Shawn Michaels had to defend his World Title against the challenger Steve Austin, who won the Royal Rumble earlier that year to earn his shot.

Shawn went into this match heavily injured so this would also become Shawn Michaels’ last match for more than 4 years.

Who knows where it would rank, had he been 100% going into the match??

• The Undertaker vs. “The Heartbreak Kid” Shawn Michaels •

On March 28, 2010 at the WrestleMania XXVI PPV, The Undertaker wrestled Shawn Michaels in a “No DQ – Streak vs. Career” match, where The Undertaker put his legendary WrestleMania on the line, while Shawn either had to win or he would have had to end his pro-wrestling career.

In a great 24 minute battle, that could only be outshined by their previous match from WrestleMania 25 (not the Main Event then), The Undertaker defeated Shawn Michaels, who therefore had to retire and didn’t return to the ring as an active Pro-Wrestler ever since.

On March 28, 1999 at the WrestleMania XV PPV, WWF Champion The Rock had to defend his World Title against the challenger Steve Austin, with Mankind as the special referee.