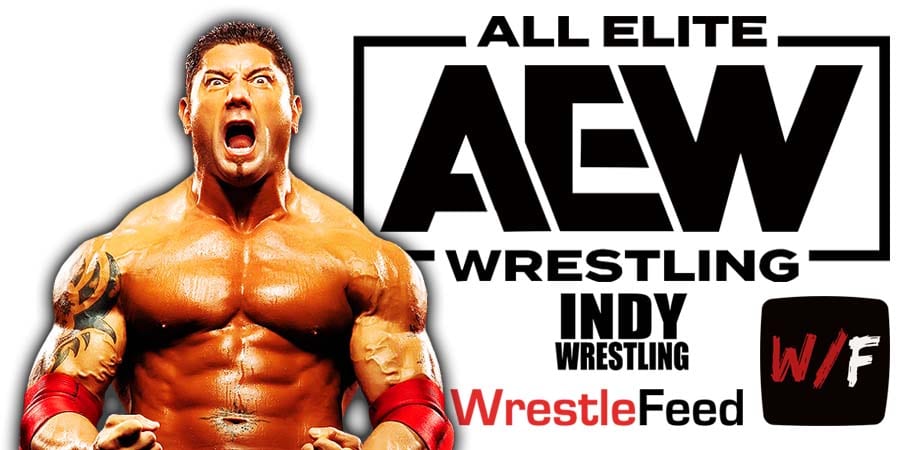 On this week’s episode of AEW Dynamite, “The Big Show” Paul Wight made his official All Elite Wrestling debut and he was interviewed by Tony Schiavone.

AEW President Tony Khan appeared on the AEW Unrestricted podcast and had the following to say about this new signing:

“He told the world, and it’s true, that there’s going to be a big star signed with AEW. He’s coming here and it’s absolutely true what Paul said, this Sunday, a major star in the world of wrestling.

A huge star is going to come and sign a multi-year contract with AEW on Sunday at the pay-per-view. So, I can confirm what Paul said is true and I’m not talking about the person in the ladder match.

A fan began speculation that former WWE Champion Batista could be AEW’s latest signing as he tweeted the following:

“Wait… @PaulWight said “Evolution” instead of Revolution was that on purpose? He says “hall of fame worthy” too. So gotta ask @DaveBautista just curious where you will be this Sunday?”

Batista replied the following to this fan:

“They’re going to have to come up with another word thats used specifically for professional wrestlers who actually mean it when they say they’re retired. Currently the word “retired” has zero credibility by professional wrestling standards. 🤦🏻 “

They’re going to have to come up with another word thats used specifically for professional wrestlers who actually mean it when they say they’re retired. Currently the word “retired” has zero credibility by professional wrestling standards. 🤦🏻 https://t.co/tFYG2UQGRx

Batista announced his retirement from pro-wrestling after his match with Triple H at WrestleMania 35.

Also Read: Possible Spoiler On Who AEW’s “Hall Of Fame Worthy” Signing Could Be