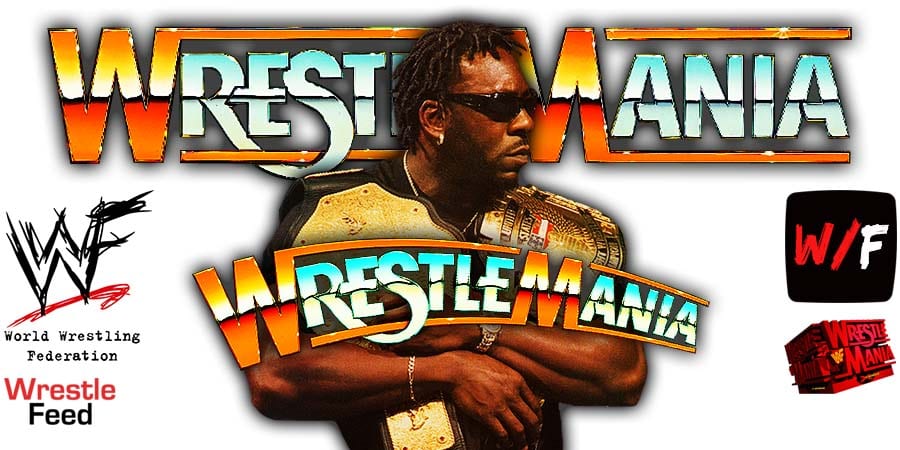 Later during the show, The Miz and John Morrison tried to turn Bad Bunny on Booker T by saying that Booker T is a “has been”. Booker T was standing right behind them and heard everything.

This began rumors that Booker T & Bad Bunny will team up to take on The Miz & John Morrison at WrestleMania 37 (another rumor is that instead of Booker T, it will be Damian Priest).

Booker T said the following about this rumor on his Hall Of Fame podcast:

As far as this thing, it’s a rumor, guys. I’m not going to be at WrestleMania in any capacity other than being behind the desk as of right now. Always, though, ‘card subject to change’ in professional wrestling. And the thing is, if there’s an outside chance of me walking the aisle at WrestleMania, I would take it.”

On the stage or from the top rope. Massive respect to @sanbenito for his performance at the #RoyalRumble and a shout-out to @BookerT5x for looking ready another in-ring run!!! #CanYouDigThat #BookerT @wwe pic.twitter.com/OhTvc5fm1l

Booker T recently said on his podcast that he wants a WrestleMania 19 rematch against Triple H at a Saudi Arabia pay-per-view, where he’ll be paid big money while picking up a win over The Game.

Booker T made it clear once again that circumstances will need to be right if he returns for one more match in WWE:

I said that Saudi Arabia would be a great time for me to come back and do something. People out there in Saudi still watching old people, still think I’m current [laughs].”

Louie was scheduled to wrestle Larry Zbyszko at the WCW SuperBrawl VIII PPV, but that match never happened, because Spicolli passed away from a drug overdose one week before the event.