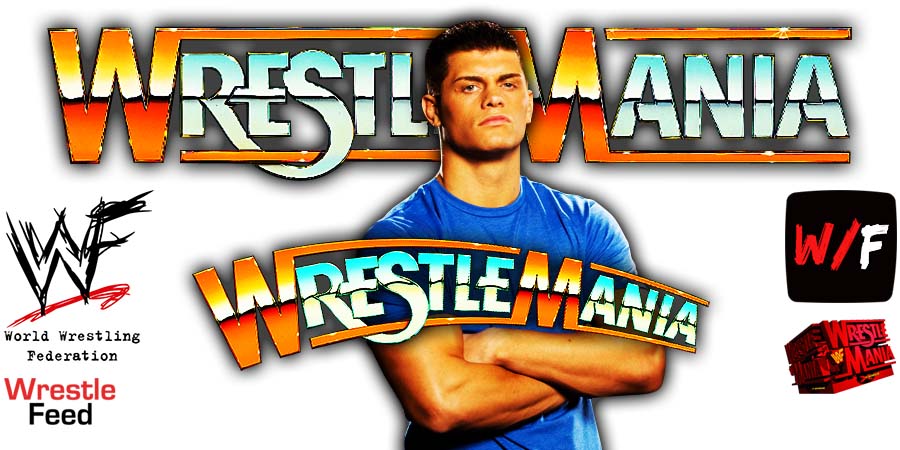 • Cody Rhodes Expected To Appear At WrestleMania 38, In Line For A Big Push In WWE

As we noted earlier, PWTorch reported that Cody Rhodes wanted to get paid big money in his new contract, which would put him up there with CM Punk and Bryan Danielson, but AEW President Tony Khan wasn’t willing to do that (tap here to read the complete story).

This resulted in him leaving All Elite Wrestling and he is now expected to sign with his former company, WWE.

In another update from PWTorch, Cody is scheduled to get a big push in WWE and is expected to appear at WrestleMania 38 in April:

“Cody and WWE haven’t confirmed it but Cody is going to WWE and he’s going to get a big push. Vince McMahon is going to treat this as a big deal.

Everybody I talked to thinks Vince loves the idea of acquiring a co-founder and EVP (of AEW) and, you know, main event wrestler.

He just held their secondary singles title not that long ago, and having him show up on WWE TV is something that Vince is very interested in taking advantage of and making money on it.

It could even be a situation where Cody is in a major match at WrestleMania.

I literally had four plus hours of conversations before recording this with people in AEW and I’m sure there’s more that I’ll get into in coming days and on different podcasts about the situation with Cody. But I fully expect Cody to be on WrestleMania either as a wrestler or making his first appearance.

I don’t know if they can hold back on putting him on TV so I could even see him appearing on RAW or SmackDown next week. I’m not aware of there being any kind of non-compete at this point since he’s been a free agent for a while so Cody could appear.

I wouldn’t be shocked if there’s even some augmentation to the booking plans for WrestleMania perhaps related to the Elimination Chamber in order to set the stage for Cody to do something really big at WrestleMania.

I think Cody will get a big push, at least at first. You know, there’s different opinions on whether Vince is going to resent Cody for creating competition or admire Cody for his entrepreneurial spirit and being classy about it the whole way.

You know, Paul Heyman, Eric Bischoff, Jeff Jarrett, they all competed with Vince and they all got jobs again. So, you know, we’ll see how it goes.

Vince saw Cody as a mid-carder. He saw Christian as a mid-carder. Christian went to Impact Wrestling and won a World Title, he came back, he got a better push, but it wasn’t at the level of Edge, which is what, you know, Christian always wanted. He wanted to be at the Edge level.”