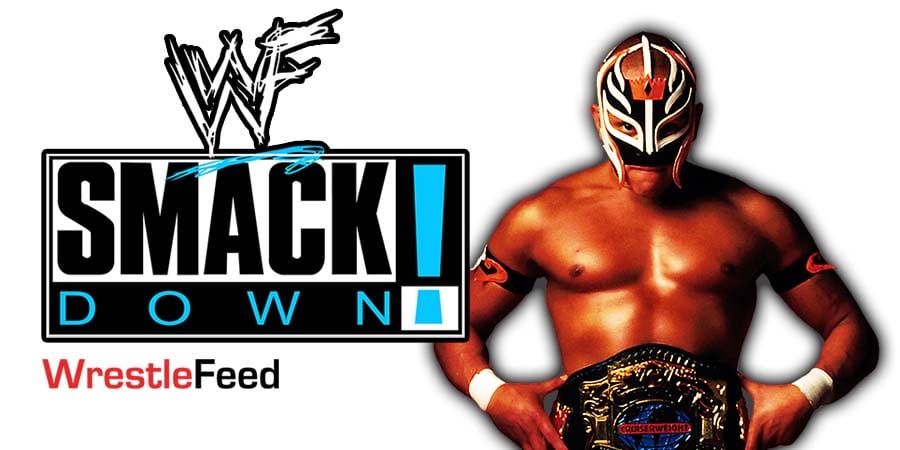 – Universal Champion Roman Reigns kicked off SmackDown and called his cousins to the ring. The Usos came out, and Roman told Jimmy to acknowledge him. Jimmy said he thought he already did at Hell In A Cell last year. Roman told The Usos they better get the job done and win the SmackDown Tag Team Championship tonight.

– In a backstage segment, Roman Reigns was angry at The Usos and said he doesn’t care if Jimmy’s shoulder was up, the bottom line is that they lost. Roman then told them to find Sonya Deville and get another Title match tonight.

– Chad Gable approached The Street Profits and said they have been losing as of late, and proposed being their advisor to unleash their inner Alpha. Street Proftis declined his offer and left.

– Carmella def. Liv Morgan (Carmella is now calling herself “The Most Beautiful Woman In All Of WWE”)

– The Mysterios were leaving the arena, but Adam Pearce & Sonya Deville stopped them and told them that they’re going to defend their Titles against The Usos again tonight.

– SmackDown Women’s Champion Bianca Belair challenged Bayley to a match at Hell In A Cell 2021.

– The Street Profits told Otis that Chad Gable is holding him back, and this led to Otis attacking them.

– King Corbin def. Shinsuke Nakamura (Corbin took his crown back and rushing to the back, but Rick Boogs stopped him. Nakamura then took out Corbin and stole his crown again)

– Apollo Crews (c) def. Kevin Owens to retain the Intercontinental Championship (Commander Azeez was banned from ringside in this match, but he attacked Owens backstage before the match. After the match, Sami Zayn ran out and delivered a Helluva Kick to Owens)

– Dominik & Rey Mysterio (c) def. The Usos via DQ to retain the SmackDown Tag Team Championship (Roman Reigns attacked Dominik to cause the DQ. He shouted that Jimmy was gonna lose again and embarrass their family. Roman then brutally assaulted Dominik & Rey with steel ring steps. Roman then choked out Dominik with the Guillotine. Jimmy left the ring, but Jey was still there and Roman began pounding Dominik with heavy shots again and laid him out with a Deadlift Powerbomb to end the show)

It was taped at the Tacoma Dome in Tacoma, Washington and featured matches, interviews & storyline segments on the road to the ‘WWF King of the Ring 2000’ PPV.

1. King Of The Ring 2000 Qualifying Match: Chyna vs. The Godfather