We get a backstage interview segment with Shorty Gable and Gable says King Corbin is the one who came up “short” tonight.

Corbin then attacked Gable and laid him out.

Up next is the main event of the evening and it is a Hell in a Cell match for the Universal Championship!

Universal Champion “The Beast Slayer” Seth Rollins makes his way out first and he gets pyro in his entrance.

“The Fiend” Bray Wyatt makes his epic entrance next. This is The Fiend’s second match in WWE. His first match was at SummerSlam 2019, where he defeated Finn Balor and sent him back to NXT. 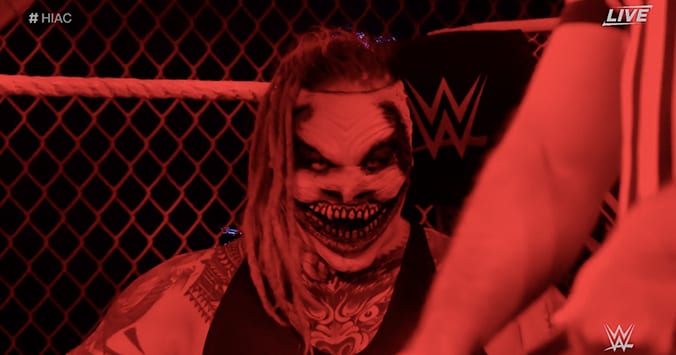 The match begins and both men start trading shots. The red lights are still on during this match.

Rollins is clearly afraid of The Fiend and he takes out a Kendo Stick and hits The Fiend with it, but it has absolutely no effect on The Fiend!

Fiend lays out Rollins in the center of the ring with a slam! Fiend sends Rollins into the steel steps on the outside multiple times.

Rollins comes back into the fight as he nails Fiend with the Steel Steps. Rollins takes out a Table from underneath the ring.

Rollins hits two Suicide Dives on The Fiend into the Cell wall. Rollins goes for another Suicide Dive, but The Fiend catches him and hits him with a Sister Abigail straight into the cage!

Rollins superkicks The Fiend and Fiend is now on top of a Table set up in the ring. Rollins puts The Fiend through a table with a Frog Splash, but Fiend gets up from it!

Rollins hits a Stomp on The Fiend, but he immediately gets up! The Fiend hits a Sister Abigail and goes for the cover, but Rollins kicks out!

The Fiend throws Rollins outside the ring and The Fiend takes out a giant hammer from underneath the ring.

Fiend uses that hammer to push Rollins into the Cage and squeeze Rollins’ stomach. Rollins fires back with a Superkick and Stomps Fiend’s head on the hammer.

Rollins hits Fiend with a Diving Knee in the ring and hits it again. Rollins hits two superkicks and three back to back Stomps, but The Fiend still gets up!

Rollins hits a Pedigree and another Stomp and goes for the cover, but The Fiend kicks out at 1! Rollins hits 5 back to back Stomps and the fans are booing. Rollins is not trying to pin The Fiend.

Rollins takes out a Steel Chair from underneath the ring. Rollins nails Fiend in the head with a Steel Chair and goes for the cover, but Fiend kicks out at 1 again!

CHAIRSHOT TO THE HEAD!!! #HIAC pic.twitter.com/saZwoQaOl8

Rollins now places the chair on Fiend’s head and smashes it with a ladder! Rollins goes for the cover, but Fiend kicks out again!

Now Rollins places the ladder and chair on Fiend’s head and hits it repeatedly with a tool box. Rollins now places that box on top of Fiend’s head as well.

Rollins now takes out a Sledge Hammer and hits it on The Fiend’s head and the referee calls for the bell and the crowd is booing big time.

The Hell In A Cell structure has been pulled up and the match is over. 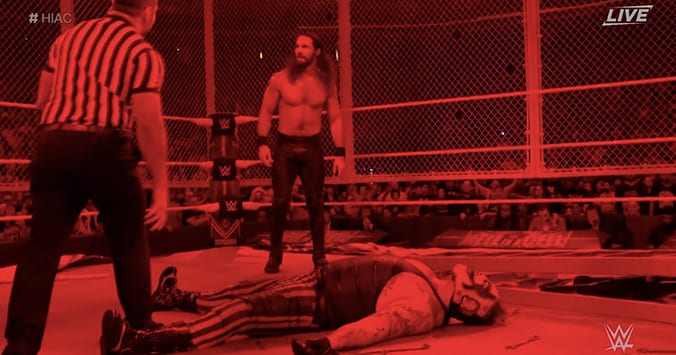 Fans are chanting AEW and suddenly The Fiend gets up and lays down Rollins with The Mandible Claw. Fiend hits a Sister Abigail on Rollins on the outside.

The Fiend hits Rollins with the Sister Abigail on the exposed floor and the fans chant AEW again.

The Fiend ends the PPV by applying the Mandible Claw again and the show goes off the air with fans booing.

Below are the complete results from tonight’s WWE Hell In A Cell 2019 pay-per-view:

– Hell in a Cell match for the RAW Women’s Championship: Becky Lynch (c) def. Sasha Banks to retain the Title.

– Hell in a Cell match for the Universal Championship: “The Fiend” Bray Wyatt def. Seth Rollins (c) via DQ, Rollins retains the Title