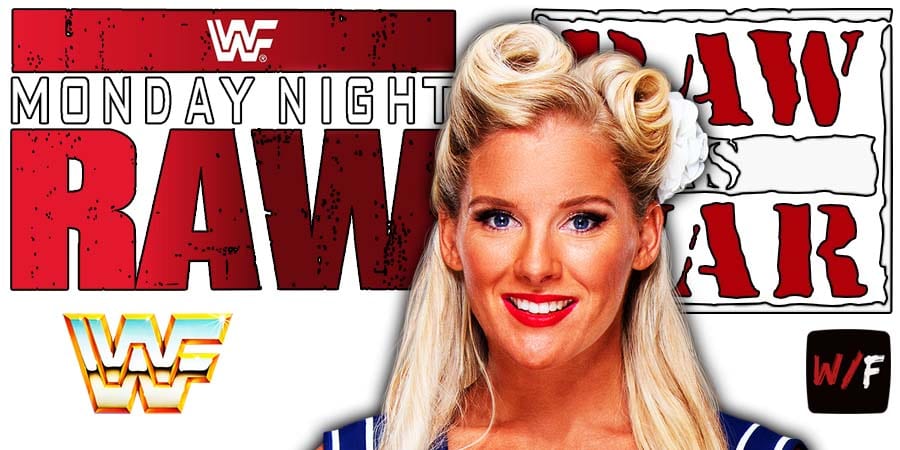 • Lacey Evans Comments On Her Pregnancy

As seen on last night’s RAW, Lacey Evans refused to compete in a tag team match against Charlotte Flair & RAW Women’s Champion Asuka when Peyton Royce tagged her in.

According to Wrestlinginc, Lacey’s pregnancy is real and not a storyline (although WWE is playing the storyline that Ric might have gotten Lacey pregnant).

WWE Officials found out this good news on the day of RAW and her segment was then written with her pregnancy in mind.

A WWE interviewer tried to get a comment from Lacey on her pregnancy after RAW, and she said the following:

“You nasty thing, I said everything I wanted to say out there. Nasties like yourself need to learn to stay out of people’s business. Just know that I am very happy.”

Lacey was scheduled to face Asuka for the RAW Women’s Championship this Sunday at Elimination Chamber 2021 pay-per-view, but that match will now get changed. WWE hasn’t announced Lacey’s replacement yet.

This also means that Lacey will no longer be in the RAW Women’s Championship match at WrestleMania 37, as it was being discussed.

On this day in 2006, we lost Old School Tag Team Wrestling Veteran Johnny Grunge (Real name: Michael Durham) at the young age of 39 due to sleep apnea complications.

At the 2005 ECW reunion show ‘Hardcore Homecoming’, he participated in a memorial segment for deceased ECW wrestlers, including his late tag team partner, who passed away in 2002.