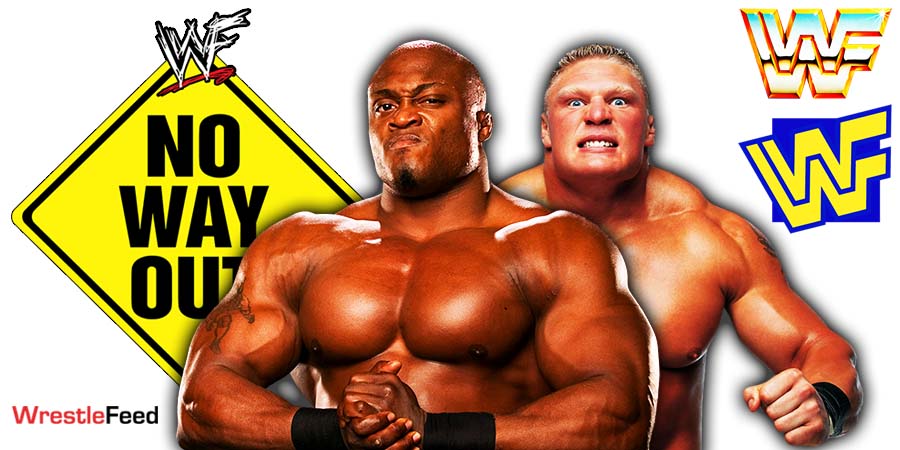 • Real Reason Behind Bobby Lashley Not Competing At Elimination Chamber 2022

In the main event of today’s Elimination Chamber 2022 premium live event, Bobby Lashley lost the WWE Championship – not because he got pinned, but because he couldn’t compete.

During the Men’s Elimination Chamber match, Seth Rollins powerbombed Austin Theory through the glass door of Lashley’s pod, and Lashley went down.

WWE Official Adam Pearce and other personnel then entered the Chamber to check on Lashley, and he was then helped out of the Chamber and taken to the back.

WWE has provided the following update on The All Mighty:

“Bobby Lashley has entered concussion protocol and will travel back to the United States under medical supervision to undergo additional evaluation.”

The real reason behind this above stated storyline is that he’s dealing with a shoulder injury.

“I have under good authority that Lashley is shoot hurt and has been hurt since the Rumble match. If you’ve noticed, he hasn’t [wrestled on] any RAW’s. He hasn’t really defended his Title. He was shoot hurt at the Lesnar match at the Rumble.

From what I’m told, it’s for at least 4 months. Shoulder surgery. I’m hearing that he might not even make it to Mania.”

PWInsider has confirmed this report and further noted that the injury happened due to one of Brock Lesnar’s suplexes at the Royal Rumble.

We’ll keep you updated regarding Lashley’s status here on WWFOldSchool.com and on our WrestleFeed App.

It was broadcasted from the Savvis Center in St. Louis, Missouri and featured matches, interviews & segments, on the road to the ‘WWF No Way Out 2001’ PPV.

1. The Undertaker vs. Christian vs. D-Von Dudley