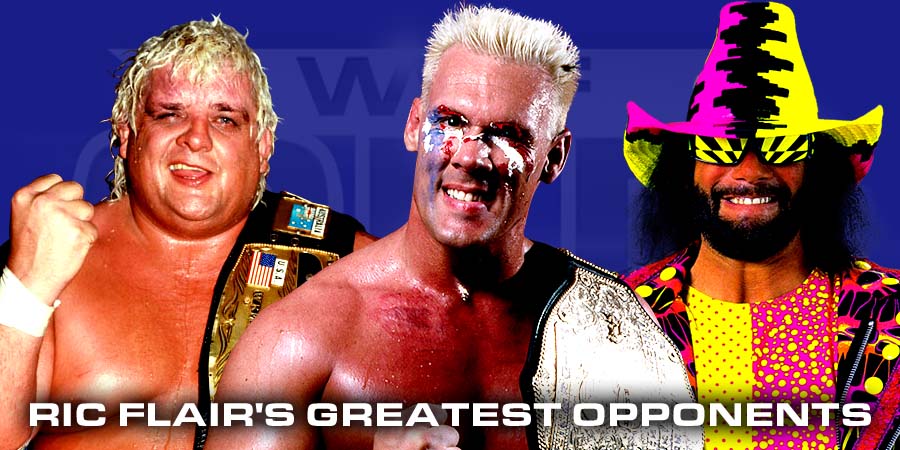 Debuting in 1972, “The Nature Boy” Ric Flair, has wrestled 1000s of different opponents, wrestling all over the planet, until retiring at WWE WrestleMania 24 in 2008.

We’ve listed his 5 Greatest Opponents of all time:

This match was originally booked for WWF WrestleMania VIII and happened as the Main Event of 35 (!!!) House Shows between October 1991 and March 1992, with Hogan winning most of them either via count out or via DQ. Flair only won 2 or 3 but also via count out.

Those matches were anything but bad, so – as opposed to popular belief – the general rehearsals were not the reason for the match being cancelled on the WrestleMania 8 card.

The Hulkster, who was booked to win the belt in the main event that night, was going to take time off for personal reasons and to make movies, so him challenging for the WWF Championship was canceled for obvious reasons.

2 Years later both were in WCW and Hogan’s very first match for the company would be the Main Event of the ‘Bash at the Beach 1994’ PPV, challenging for the WCW World Heavyweight Champion against the reigning Title Holder “The Nature Boy” himself, Ric Flair.

Flair would then gain a count out victory of the Hulkster on the Clash of the Champions 28 TBS Special, but lost a ‘Career vs. Career’ match in a Steel Cage at WCW Halloween Havoc 1994.

Flair would (kayfabe) return to WCW just a few months later and keep feuding with Hogan for the better part of 1995, where most of the times Flair would be in Big Van Vaders Corner, and for a few more months of 1996, where Ric Flair’s reincarnated 4 Horsemen stable would join Kevin Sullivan’s Dungeon of Doom Stable to form “The Alliance To End Hulkamania”.

In July of 1996, Hogan turned heel and formed the nWO, which shortly after that event, would turn Ric Flair Babyface, so their feud could continue, only the roles were different now.

The Nature Boy would beat WCW World Champion “Hollywood” Hogan via DQ in August on the Clash of the Champions 33 TBS Special.

Their feud would somehow always go on and off, and in 1999 both of them would continue their main event matches, with Hollywood Hogan beating Ric at WCW SuperBrawl IX and Flair finally beating the evil nWo Leader to win the WCW World Title at WCW Uncensored 1999.

Their last major WCW match was the Yappapi Indian Strap match, that happened a year later on WCW Uncensored 2000, where Hogan gained the upper hand again.

Apart from another meeting on regular WWE TV in 2002, this time for the Undisputed WWE Championship, those were basically the highlights of their feud.

In 2009 Hulk Hogan started the so called ‘Hulkamania Let The Battle Begin’ Australia Tour, where he would beat his archnemesis Ric Flair in the main event of all 4 Shows.

A Year later on March 08, 2010 Hogan and Flair would meet one final time during an episode of TNA iMPACT, this time in a tag team match, where Abyss & The Hulkster could defeat AJ Styles & The Nature Boy.

A planned singles match in TNA never happened, due to Hogan’s chronic back problems, that were only solved a few years later, but put him out of action for most of his TNA run.

This feud, whether you’re a fan of them or not, is certainly one of the all time great rivalries in all of Professional Wrestling.