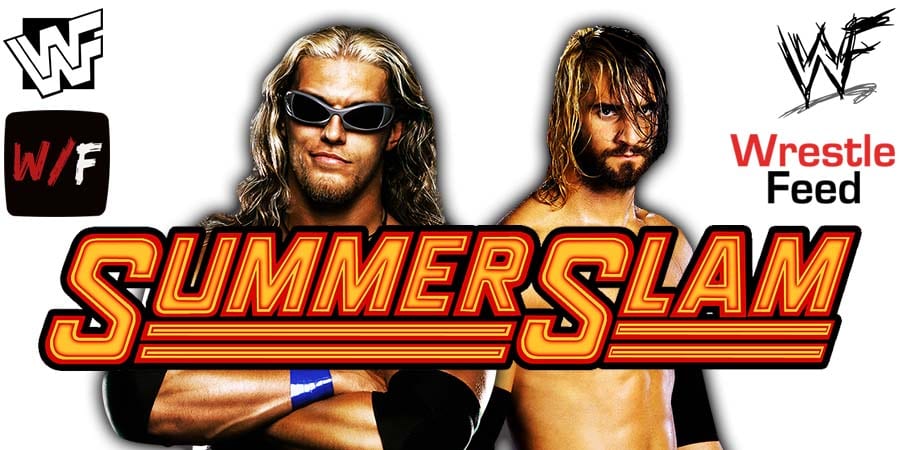 • Seeds Planted For Edge vs. Seth Rollins After Recent Announcement

On the latest episode of SmackDown, Universal Champion Roman Reigns and Paul Heyman came out for a promo segment. Heyman listed all the names that Reigns has defeated and said there’s no one left.

Edge then came back and began brawling with Reigns. Edge was setting Roman up for a Con-Chair-To, but Jimmy Uso made the save. Edge then speared Jimmy through the ringside barricade. Edge sent a big message to the Head Of The Table to end SmackDown.

WWE has officially announced Roman Reigns vs. Edge for the Universal Championship as the main event of next month’s Money In The Bank 2021 pay-per-view (which will take place in front of a live crowd).

On Talking Smack, it was revealed that Edge went to Adam Pearce and Sonya Deville after SmackDown went off the air to demand a one-on-one Universal Title match against Reigns at Money In The Bank and it was made official.

Seth Rollins was on Talking Smack as a guest when the above footage of Edge getting a Title match was shown, and Seth wasn’t happy about it.

After picking up two victories over Cesaro, Rollins approached Pierce & Deville backstage on SmackDown to ask for a Universal Title match, and they said they would consider it.

Before the Reigns vs. Edge announcement, Rollins said the following on Talking Smack:

“It was promised to me (a Universal Championship match). They were inclined to agree. If you’ve ever had a human conversation, that means yes. So, that’s a promise, and they’re talking to me!”

After the Reigns vs. Edge announcement, Rollins said the following:

“No, no, no, this can’t be. You guys must have misheard that. There’s no way. They promised it to me!

This is everything that I’ve worked for! I’ve never been more ready in my entire life. I deserve the opportunity, not Edge. Where has he been? He hasn’t been here since WrestleMania, he hasn’t done anything.

He got his match at WrestleMania. I don’t care if it was a triple threat match. That’s not my fault! There’s got to be something that we can do.

With this, seeds for the rumored Edge vs. Seth Rollins match at SummerSlam 2021 have been planted!

Also Read: Roman Reigns Reacts To Money In The Bank Match Against Edge

This episode was pre-taped at the Toyota Center in Houston, Texas and featured matches, interviews & storyline segments on the road to the ‘WWE Night of Champions 2008’ PPV.