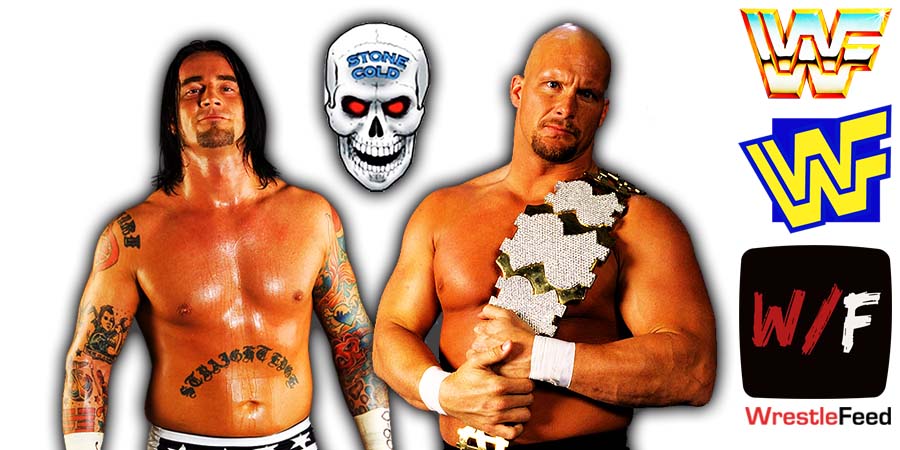 • “Stone Cold Steve Austin and CM Punk? Give me a break. You can’t even mention their names in the same breath” – Ric Flair On WrestleMania 39

As we have reported before, Triple H has given Stone Cold Steve Austin an offer to wrestle again.

With Austin posting workout videos regularly on Social Media and looking in tremendous shape, there’s speculation that The Texas Rattlesnake is going to have a match at WrestleMania 39.

On a recent Q&A edition of his podcast, 2-time WWE Hall Of Famer Ric Flair was asked about the possibility of Austin facing John Cena, The Rock or even CM Punk (who is rumored to be done with AEW and returned to his old MMA job recently) at WrestleMania Hollywood.

“For Steve to put on the tights and go out there and wrestle as Stone Cold, you know, he’ll take a lot of pride in himself, because he’s a man’s man. He always stays in good shape. I mean, his body’s still great. He looks good. Knowing his ego and knowing who he is, he’ll want to be Stone Cold.

If he wrestled CM Punk, you need to beat him in 30 seconds, so that’s not the answer. Stone Cold Steve Austin and CM Punk? Come on. Give me a break. You can’t even mention their names in the same breath. Please.

The Rock and him? I don’t know. They could look at each other and be just a question of who’s doing the favor because they’re not gonna wrestle for an hour. John Cena, I liked that idea, too. But, you know, it’s like we talked about with The Rock.

You know, the decision was made sooner than we know about it because if Steve’s getting ready to wrestle a real match, real time in LA, it’s gonna be damn good.

But I mean, come on. I don’t mean this bad, but CM Punk just can’t act like he acts in one company and go to the other and act like that and come over and expect to be in the main events.

I mean, it’s not about his ability. I’m just talking about that I can’t even fathom the WWE even entertaining bringing a guy in that would be putting him ahead of (AJ) Styles, (Randy) Orton. I mean, you could have Steve wrestle either one of those guys.

If Steve can work, if his neck is okay, Steve is a working fool. He could wrestle Randy. You’d have guys jumping off the roof if you brought Punk in there and threw him in the main event at WrestleMania.”

It was broadcasted from the Kansas Coliseum in Wichita, Kansas and featured matches, interviews & storyline segments on the road to the ‘WCW World War 3 1998’ PPV.