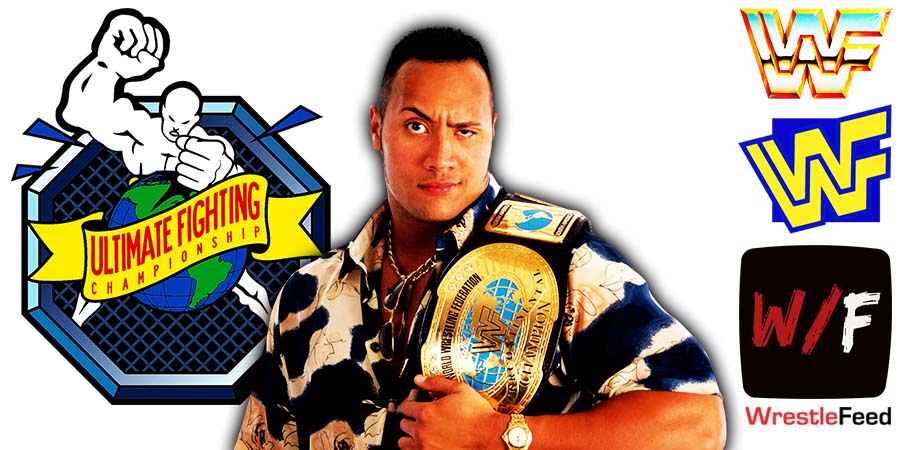 As we reported before, Dwayne Johnson’s athletic-label Project Rock has become the official global footwear partner of the UFC.

This partnership kicked off at last night’s UFC 270 pay-per-view.

During an interview on UFC Live on ABC, The Rock revealed that he considered fighting in the UFC many years ago, but is glad he didn’t.

Below is what he had to say regarding what would’ve happened to him inside the Octagon and the Francis Ngannou vs. Ciryl Gane fight:

This is a very unique match-up here, with two very unique individuals. I think a win here for either one will start to establish their legacy.

I think for me I’ll go back as a fan, and someone who has never competed in the Octagon, though I would have loved to many, many moons ago, although I would’ve got my face smashed in and I like my jaw where it’s at.”

As we noted before, Ngannou defeated Gane via unanimous decision in the main event of UFC 270 to become the undisputed UFC Heavyweight Champion.

Also Read: Francis Ngannou Reveals How The Rock Motivates Him

• Old School WWWF Veteran Would Have Celebrated His Birthday

Today would have been the 90th birthday of Old School WWWF Veteran Dominic DeNucci.

He won the WWWF World Tag Team Championship with two different partners, but his most famous accomplishment was training Mick Foley & Shane Douglas, who eventually ended up becoming Wrestling Legends themselves.