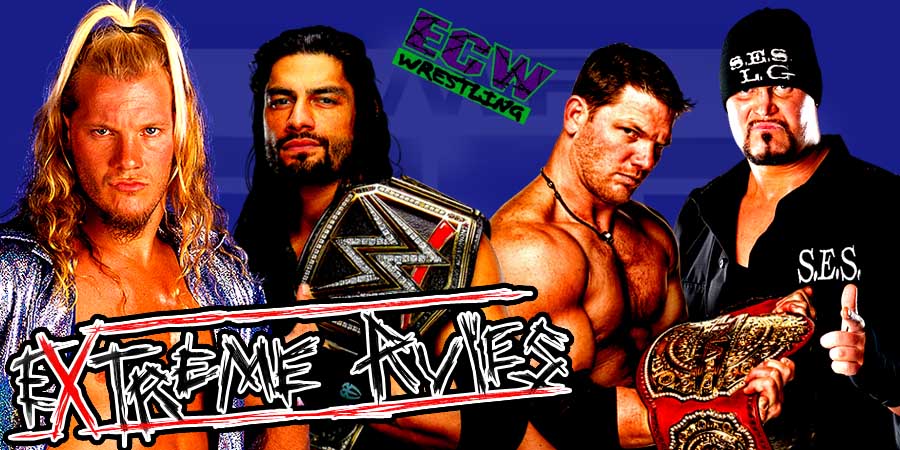 Tonight’s WWE Extreme Rules 2016 is going to be the second PPV event of this so called “New Era” of WWE. Tonight’s main event is an Extreme Rules match for the WWE World Heavyweight Championship between “The Guy” Roman Reigns and “The Phenomenal One” AJ Styles.

We start with the Kickoff show and The Dudley Boyz are out. They diss the crowd and tease taking out the tables but they don’t. Big Cass comes out to a big pop and they have an argument about the new guys of the “new era”. Big Cass ends up laying out the Dudleys!

Up next is the No Disqualification match between “The Lone Wolf” Baron Corbin & “The Showoff” Dolph Ziggler. During the ending moments of the match, Corbin hits a low blow on Ziggler and hits the “End of Days” for the win!

The main show starts with the Tag Team Tornado match between The Usos & Like Gallows/Karl Anderson. After good back and forth action, Gallows and Anderson pick up the win by hitting the “Magic Killer”.

The Usos look hurt and this might be a disadvantage for “The Guy” Roman Reigns in the main event.

Up next is the United States Title match between Kalisto & Rusev. JBL is saying that Kalisto is not 100% after the attack from Rusev on Raw.

Go to the next page to read more updates from WWE Extreme Rules 2016.