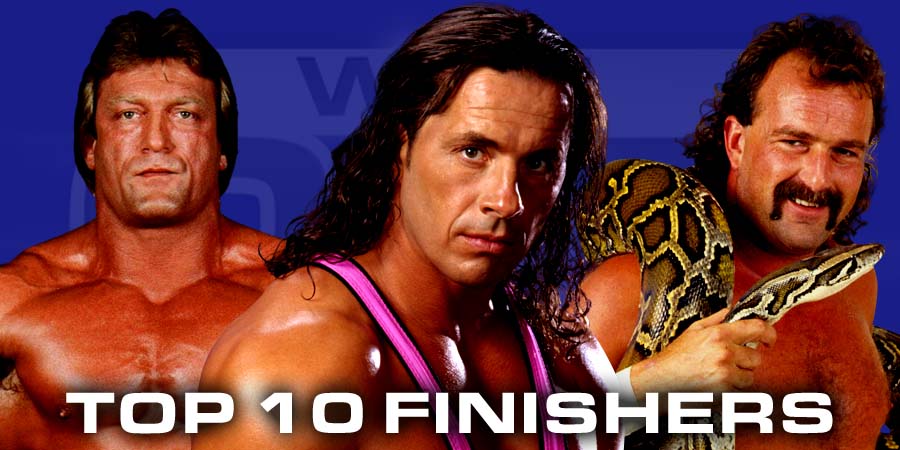 Welcome to another WWF Old School edition of Top Ten Things! Thanks once again to WWFOldSchool.com for having me, and be sure to check out my site Enuffa.com for more coverage of wrestling, movies & music!

Today’s list is about the all-time great old-school finishing moves. Every wrestler needs a signature move to put the coup-de-grace on his opponent and win the match. Ideally a finisher should a) encapsulate that wrestler’s persona and in-ring style, b) be a unique move or at least a unique twist on an existing move, and c) be believable as a match-ending move. Some finishers perfectly fit a particular character, such as Mankind’s Mandible Claw. Some don’t fit so well, like Dolph Ziggler’s Zig-Zag (Come on Dolph, you’re way better than that).

But a good finishing maneuver almost serves as a psychological goal post throughout the match. Ric Flair would work his opponents’ legs to soften them up for the Figure Four. The Rock would employ a spinebuster to flatten his opponent long enough to deliver the People’s Elbow. The finishing move is the most important single move in a wrestler’s repertoire, and historically some finishers have been so effective they’ve helped make careers. Here now is my list of the ten greatest old-school wrestling finishers:

Triple H based this unforgiving face-plant move on one of Harley Race’s signature maneuvers. Race would bend his opponent down, wedging his head between Race’s legs, and drop to his knees, driving the man’s face to the mat. Triple H went one better by double-underhooking the victim’s arms, thereby preventing anything from breaking his fall. Hunter has destroyed many an opponent with the Pedigree, and it remains one of the great match-enders.